The last locks on the Seaway

Today has been a long exhausting day. We left Salaberry de Valleyfield for the 40 minute motor to the start of the Beauharnois Canal. There is a bridge near the entrance to the Canal. When we arrived, a sign stated next opening was at 1pm. It was 7am! We tried raising the bridgemaster on VHF to confirm, but there was no response. This had been the case in this area for us when we had come up two years ago. You do not hail the bridgemaster, the lights communicate. We checked the Seaway website which indicated a ship was due at the bridge in just over an hour downbound and shortly thereafter another one was scheduled for upbound. This information is actually for motorists indicating if the bridges are open or closed, but it gave us the information we were looking for. So we decided to circle, hoping we could squeeze through with the commercial traffic. Sure enough, an hour later, we could see two ships, one coming in each direction, converging on the bridge. It opened, but the light remained red. Jay tried one last time to reach the bridgemaster and this time was successful. He gave us permission to go through ahead of the two boats. We quickly motored through and continued up the Canal.


At 9am we reached the St. Louis bridge, but it opened as we arrived and we passed through quickly and easily.  At 9:50, we arrved at the Upper Beauharnois Locks. The lock lights were red and we could see a ship in the lock, so we tied up to the Pleasure Boat dock to call the lockmaster from the phone. Two other power boats arrived at the same time we did. We were told it would be an hour wait. That our turned into two hours before we were given the go ahead to enter the lock. By this time, there were 15 powerboats and two sailboats (one of them us) waiting to enter. They ask the large boats to go against the wall and smaller boats to raft up to them. There were four rows of power boats in front of us and we had the other sailboat (a Beneteau 352) rafted to us. The man from the other sailboat came aboard our boat to help keep us off the wall, while I tended the bow line and Jay the stern line. At Beauharnois you descend 42 feet at each of the Upper and Lower locks. The extra person aboard was helpful as we were able to easily keep the boat off the wall, and the other sailor’s spouse made sure that their boat  was properly secured to ours as we descended. 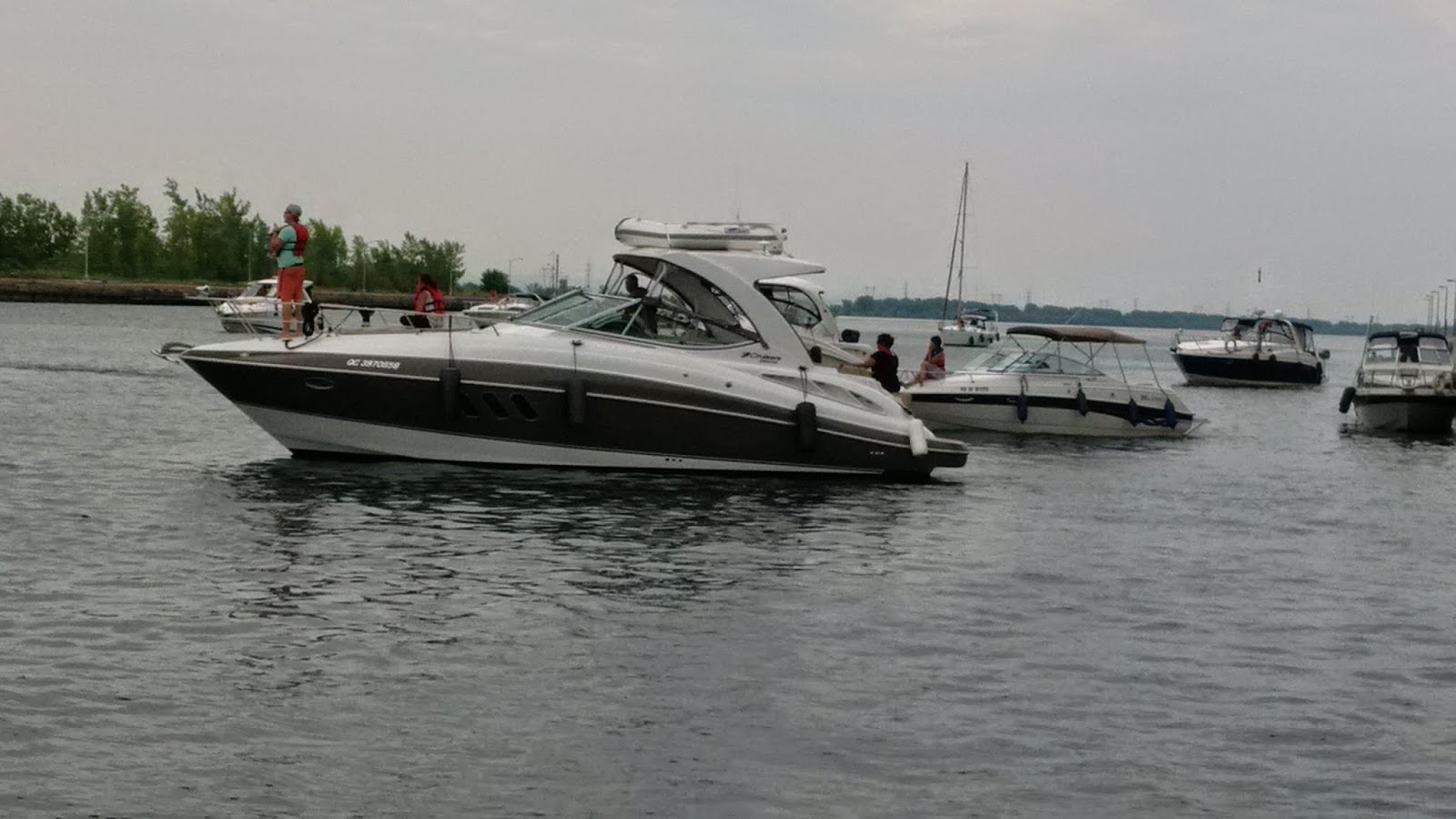 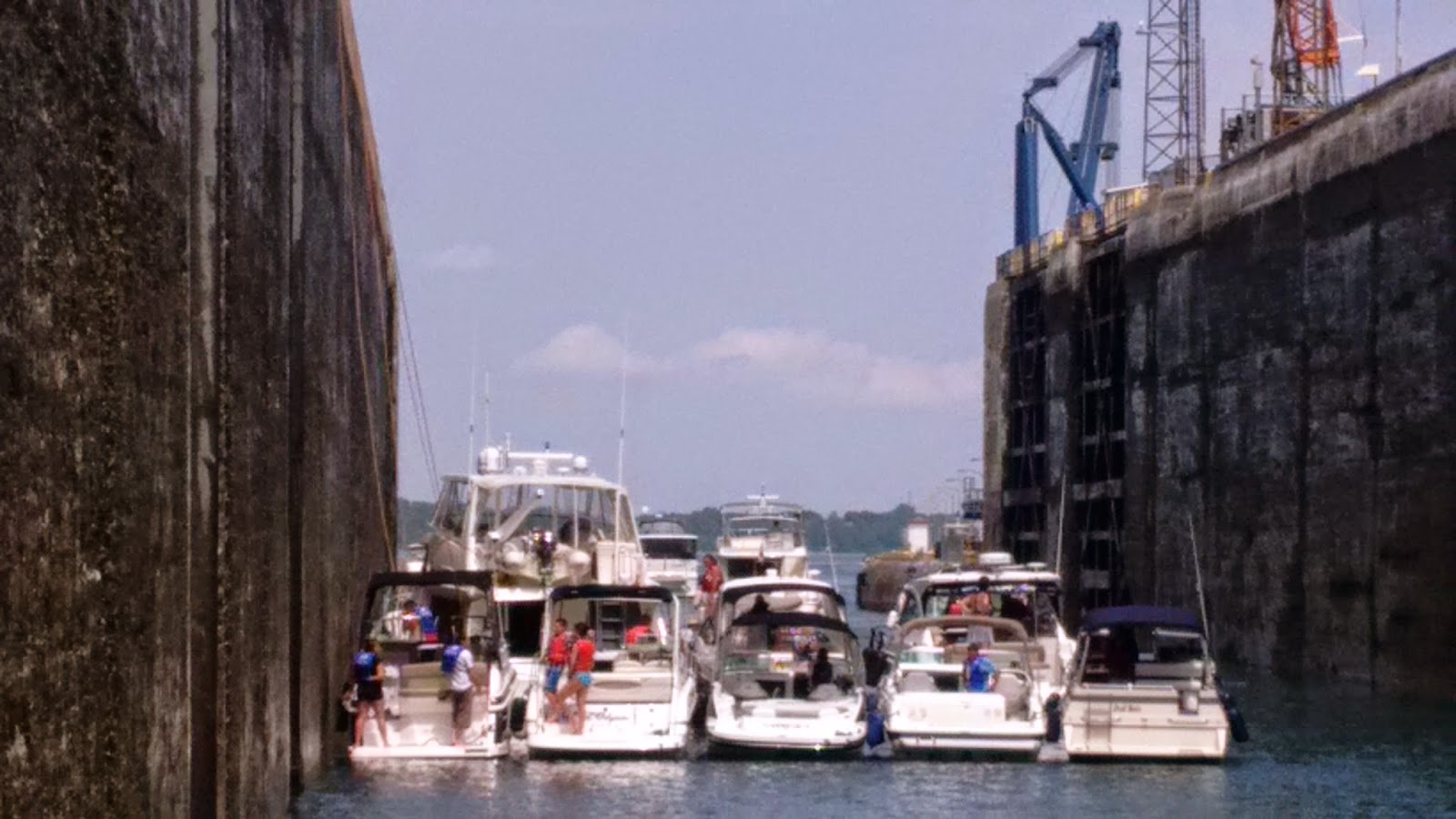 By 1:30pm we were through the Lower Beauharnois lock too, again rafted to the other sailboat. They were a very nice French couple from Sorel-Tracey. They provided us with helpful information on anchorages in Sorel-Tracey and Trois Rivieres. I spoke more French this afternoon than I have in ages. It was great to practice. We ended up motoring/locking with them all day. 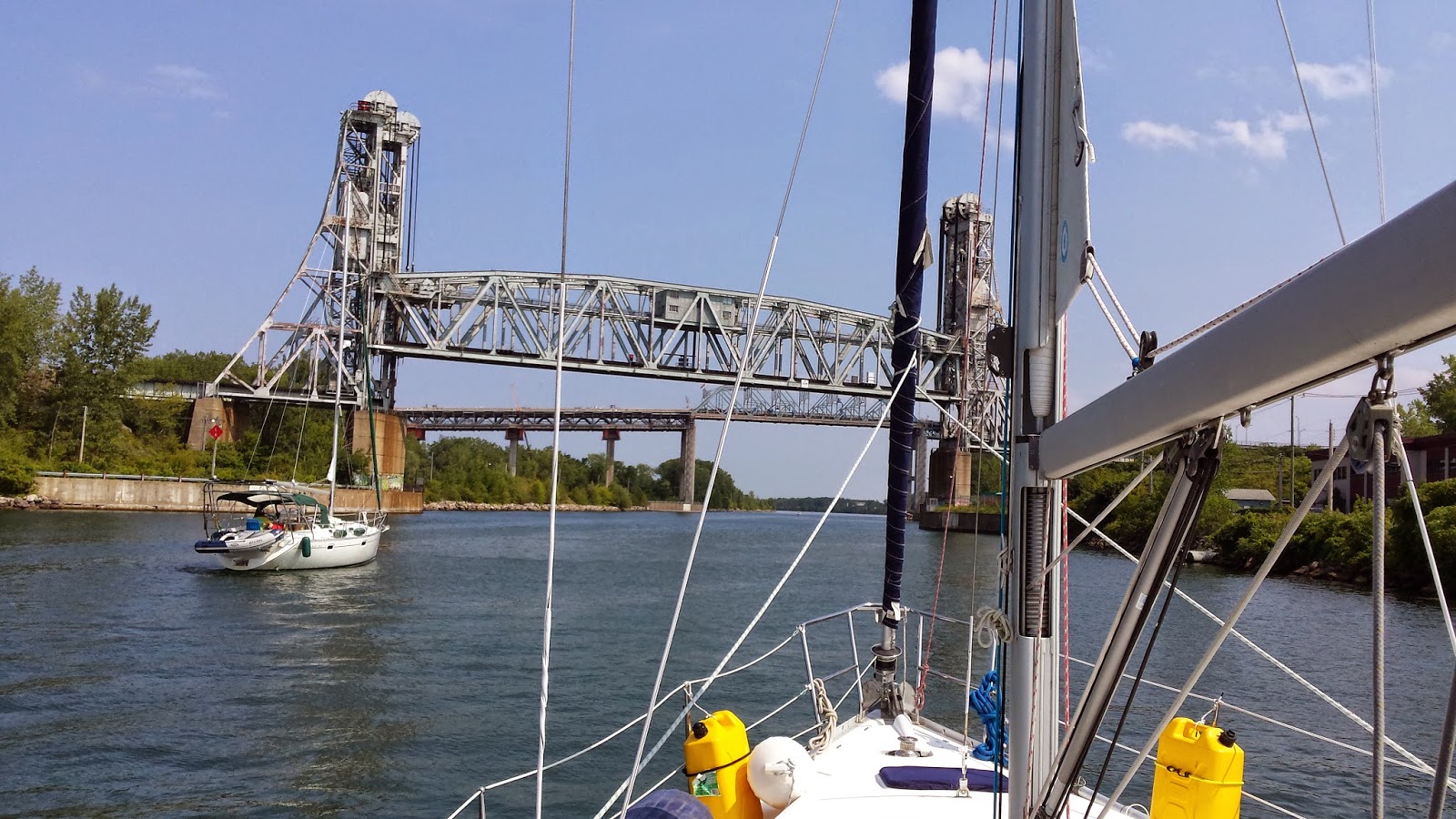 The CPR bridges opened easily without waiting and we arrived at the St. Catherine lock about 4pm. Once again we were told it would be an hour before the next lockage. Again we were rafted with the other sailboat when locking through. We had all become old hands at the procedure. We would enter before them. Lines would be lowered to us bow and stern and we would tie them off. We would then grab lines from their boat and tie them to us as they pulled alongside us. The man would come onto our boat with his boat hook and we would chat while waiting. When we would begin to descend, Jay and I would untie our lines and hold them wrapped around the cleat, slackening them as we descended, making sure that the spreaders did not touch the side and that the radar, etc. on our stern pole did not touch. When we had reached the bottom, he would return to his boat. We would temporarily tie off the lock lines, untie his lines and push him off, then untie the lock lines and push off the wall, motoring on our way.
At 7pm we exited the last lock (St. Lambert) and passed by la Ronde amusement park. The current is strong in this area in Montreal, about 2.5 to 3 knots. We reached speeds of 10 knots as we left Montreal behind us. Given the late hour, we chose an alternate anchorage off Varennes for the night and dropped anchor around 8:40pm, as the sun was setting.
It is calm tonight, so we are not too concerned even though this secondary channel is a bit more exposed than what we would normally select. Jay has elected to sleep in the cockpit tonight as it is so hot. I can see the red glow of Montreal off our bow.  We have only travelled 55 NM today in 14 hours of travelling and I am exhausted.


It had taken a full day for us to do this same stretch in the opposite direction two years ago. Most of the way there is a very small current that helped out, pushing us to 8 knots or more. However, there was a lot of waiting for bridges and locks.
Posted by Unknown