A sailor’s best friends when travelling between Trois-Rivierès and Rimouski on the St. Lawrence River is the Tides and Current Tables and Atlas of Tidal Currents. There are three places in particular when the river narrows and the tides can be quite strong. So strong, in fact, that for a sailboat which averages 6 to 7 knots of speed, if there isn’t a favourable current, you may as well stay put and wait for the tide change and the next current.


Between Trois-Rivierès and Quebec City, the narrow spot you have to navigate is Richelieu Rapids, between Grondines and Portneuf. The river here is only 450m wide and the channel only 250m wide. The ebb current (flowing downriver from Trois Rivieres to Quebec) lasts 10 hours and the flood current (flowing the other way) only 2 hours. The ebb current is around 6 knots, reaching up to 8 knots with spring tides. To make the most of the current and avoid fighting an unfavourable current, we needed to leave 8 hours before low tide in Quebec City, which for August 4th, meant leaving at 2:30am.
We pulled anchor and picked our way through several other boats at anchor to make our way back into the main channel. The moon had already set and it was overcast, so there was no extra light.


Although we’ve made overnight trips before, including some in heavy fog, this trip was a little unnerving.  The St Lawrence is a major highway for cargo ships, and the channel is not overly wide.  Although the ships are well lit, particularly from a distance, they are very difficult to distinguish from lights on land.  The channels in the St Lawrence are well marked, so at night, you see a vast array of blinking red and green lights along the horizon, backed up by street lights, buildings, and passing cars on land.  With no sun or moon, distances are impossible to judge.  Within the first hour, three cargo ships passed.  We were never in any real danger – although it is difficult to tell them from a distance, it becomes clear as they get closer.  However, it still keeps you on edge and alert, wondering if every collection of lights in the distance is going to be meeting you in a narrow channel in a few minutes.  One flashed a spotlight at us several times to make sure we saw him.
At one point, while Jay was on the helm, he saw a collection of lights in the distance, having the 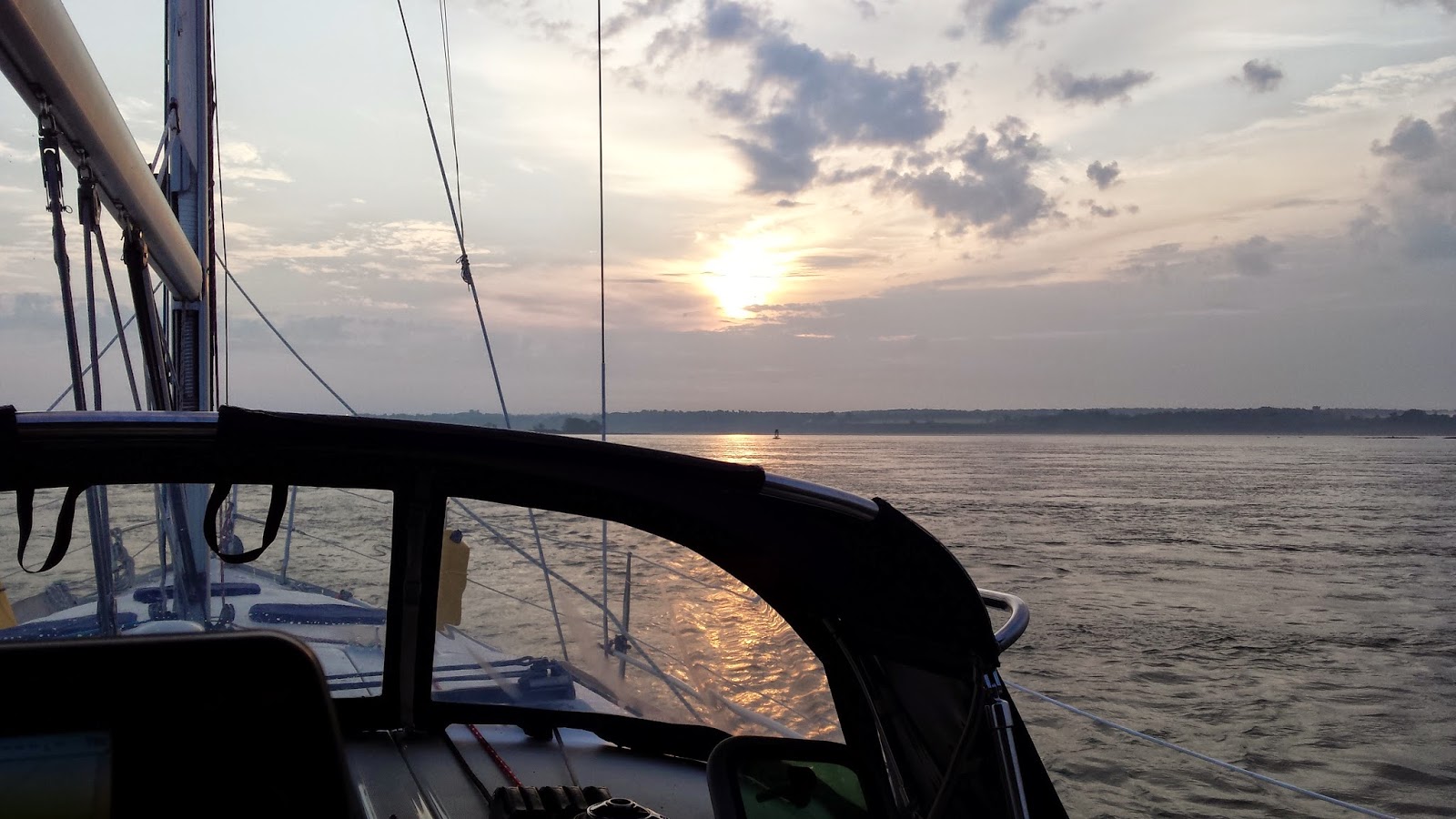 clear pattern of a cargo ship, including the green starboard light indicating which direction the ship is moving.  He dutifully moved well over to the far side of the channel to maximize the distance.  But then looking ahead at the chart, he realized that this ship was not in the channel – it was in a location where no big ships should ever go.  It took a few minutes to get close enough to see that his large cargo ship was, in fact, a church steeple lit up with multiple lights rising on top of a hill, next to a green range light on land.  At another time, one of the cargo ships only became clear once more distant lights began winking in and out as it passed in front.  It looked so much like lights on land that we were fooled for quite a while.


There was only 4 knots of wind, and that was straight on our bow, so again, we motored. Around 5:30am the sun came up and painted the sky very pretty colours through the clouds.
About 6:10am we reached the Richelieu Rapids area and I watched the GPS increase from 8.5 and 9 knots (already faster than our usual 6 to 7 knots) to 12.6 knots. The highest speed we reached was 12.7. It positively felt like we were surfing through that area. 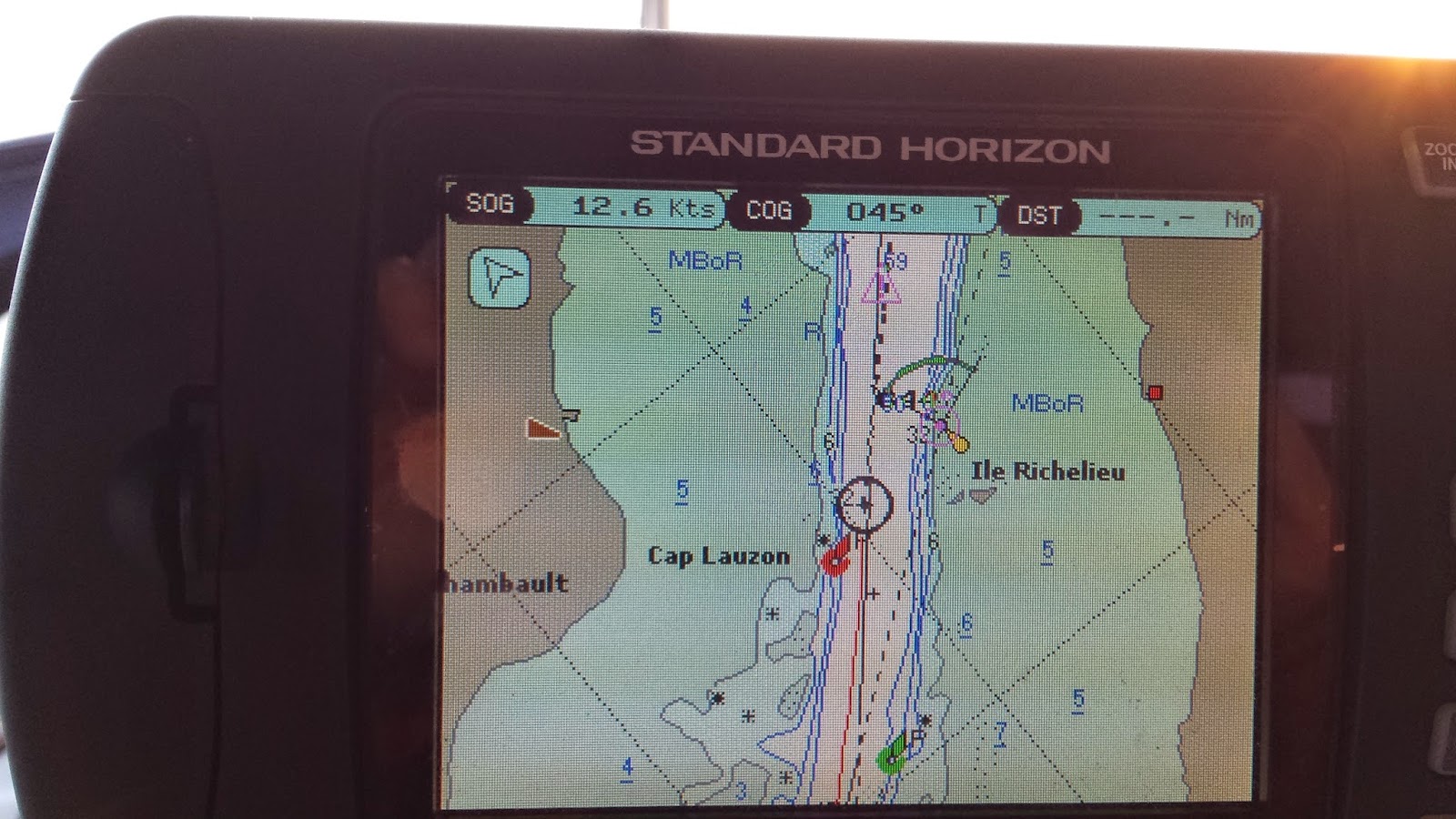 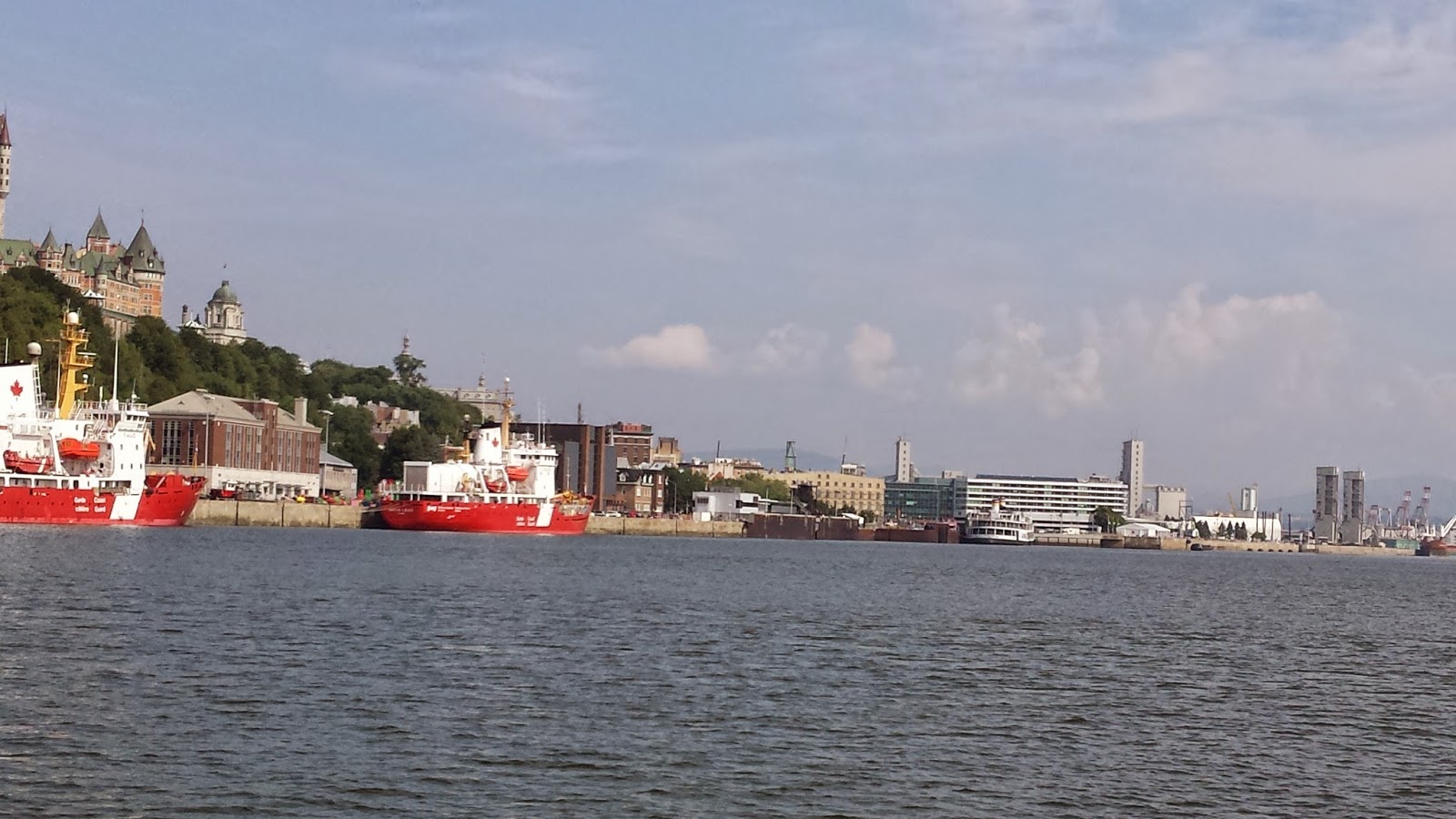 By 10:30am we had completed the 68NM journey from Trois-Rivierès and were waiting for the lock to open to enter the Port of Quebec Marina in Louise Basin. The Port has about 415 berths and can accommodate boats from 25 to 300 feet in length.  The tidal change here is about 20 feet, and unless the tide is close to mid way, the marina has to be accessed through a lock which operates from 7am to half past midnight. (Use Channel 71 to reach the lockmaster.) This is a full service marina with very nice facilities, including laundry, very nice showers, and a pool. It is also within easy walking distance of a great farmer’s market, grocery, lower town and Vieux Quebec with its wonderful sights.  Although it cost about $99 a night for My Obsession, it was worth it.
By 11:00am we had topped our fuel and were safely ensconced in a berth, just in time for a surprise visit from my Mom and Dad who were travelling in the area! 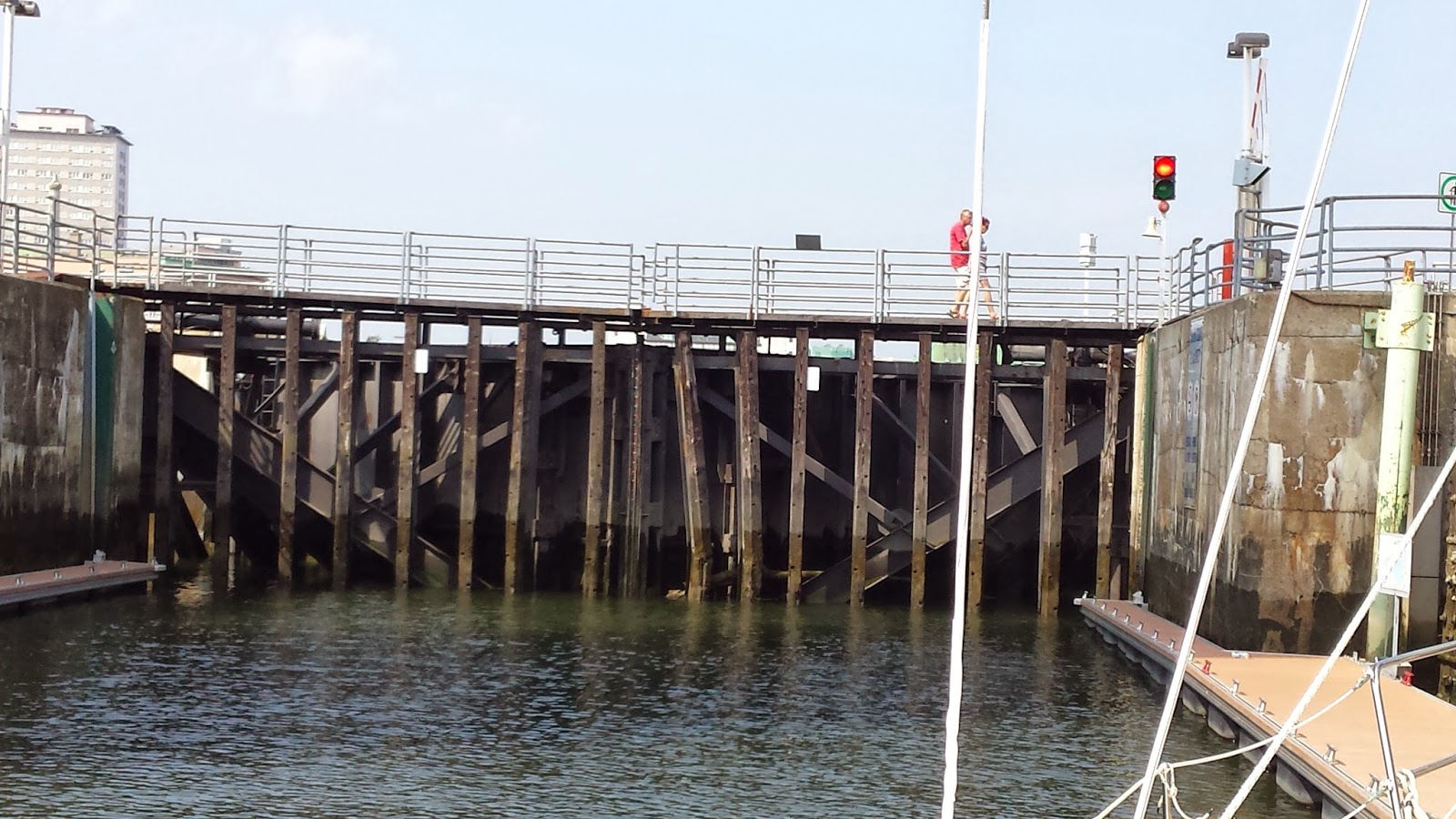 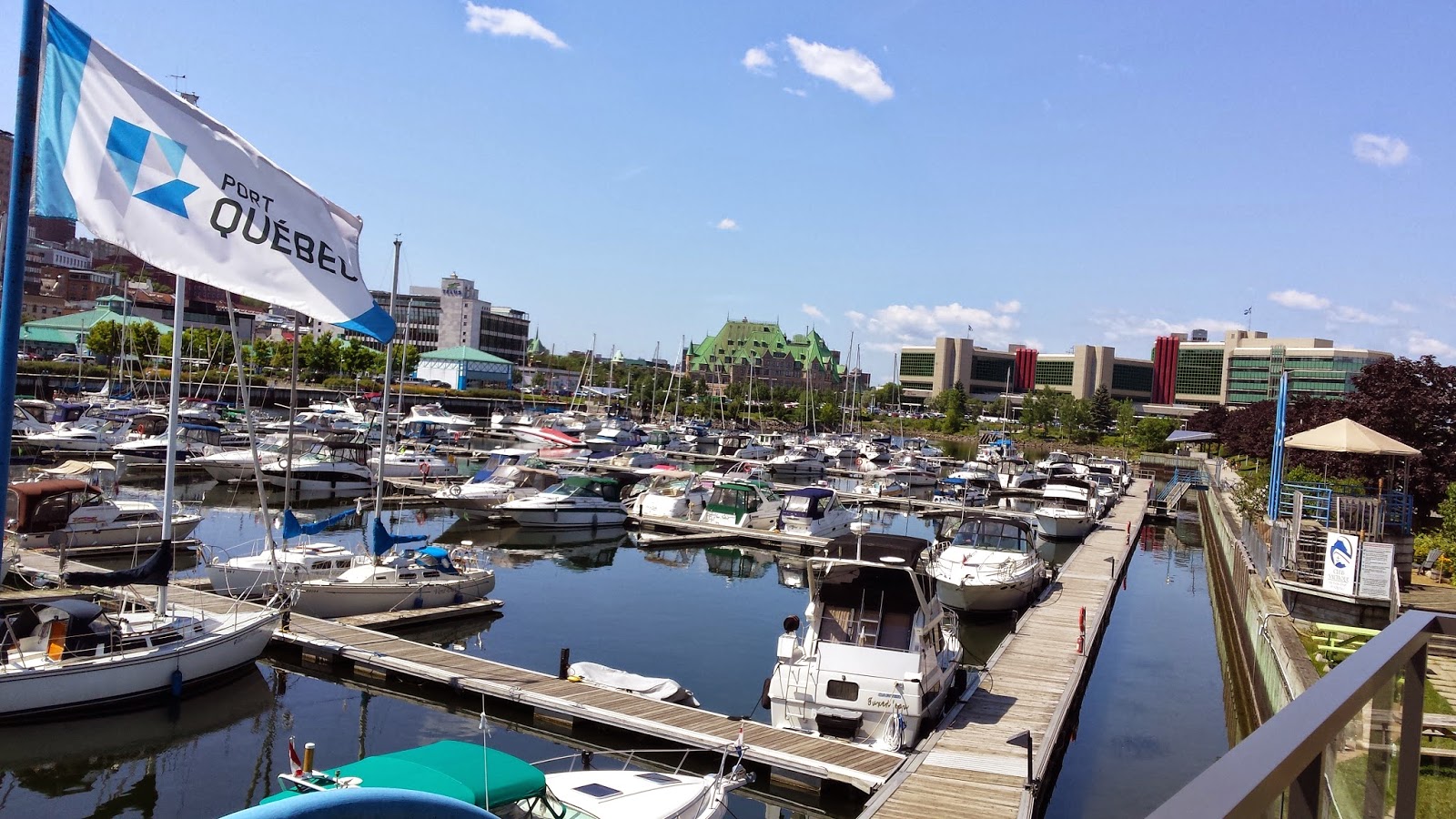