Belugas and the Saguenay River

We left Quebec City on Thursday (August 7) at 2pm. We decided to take the Île d’Orléans Channel from Quebec City which passes in front of the Montmorency Falls, which at 250 feet are nearly 100 feet higher than Niagara Falls.  This route also passes in front of Ste Anne de Beaupré. Once again we experienced some thunder and rain, but the worse part of the storm was following the ridge just to the north and missed us. 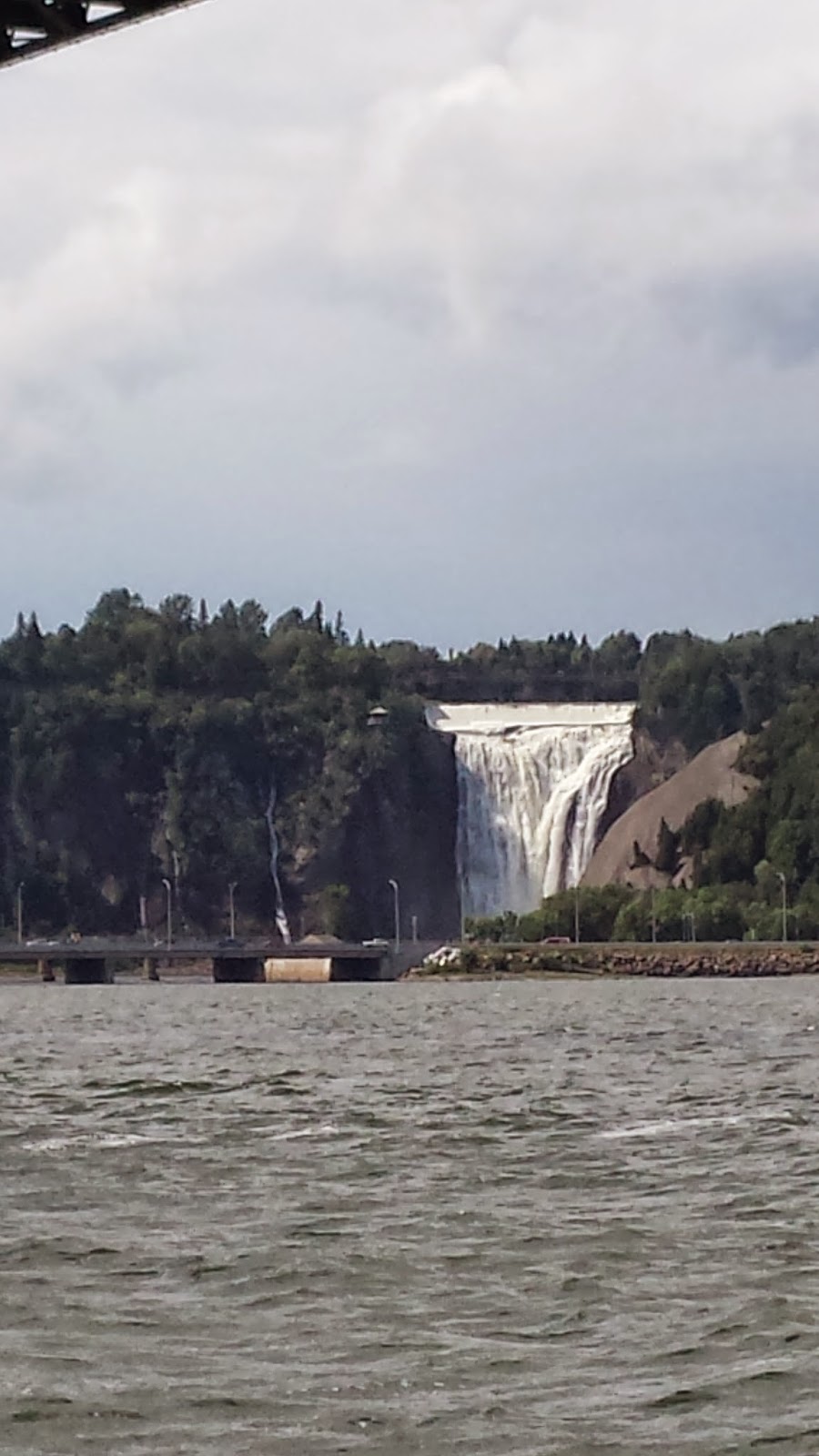 As we rejoined the North Channel, we kept on the north side of the river passing beside the picturesque Laurentian Mountains on the coast.
On this stretch Cap-â-l’Aigle is the only port accessible at any time of the tidal cycle, as many others dry out at low tide.  It is 72 miles from Quebec City.  For a boat that does 6 knots, you should leave Quebec City at 2 to 3 hours before high tide at Quebec City. With this, you fight the flood current for the first little while, but it is the only way to make sure you reach Île aux Coudres before the flood current returns. At Île aux Coudres, the river narrows as it passes between the island and the mainland. We again experienced a favourable current reaching 13 knots speed.


As darkness fell, we could see relatively well as there was almost a full moon. The wind picked up if we were too close to shore, right on our nose, but if we stayed out a bit it was reasonable. As we approached Cap-â-l’Aigle, we decided to keep going and make for an anchorage at Port-aux-Quilles. About 1am we approached the anchorage. As we motored closer to shore, the wind picked up to almost 20 knots. Suddenly, the bow of the boat swept sharply to port.  I let the boat turn to port and rounded up and my speed dropped from 7 knots to 4 knots. I had obviously been caught off guard in a strong current.  No harm was done, but I decided right then, we were not going to try and approach land and anchor in the wind and current in the dark in a strange port. So, it was on to the Saguenay River.
Unfortunately, there is also a strong current at the mouth of the Saguenay. The flood current rushing into to river mouth lasts 4 to 5 hours and the ebb current coming out lasts 7 to 8 hours. The ideal time to enter for a boat doing 6 knots is about 2 hours after low tide at Pointe-au-Père. Unfortunately, the timing did not work well for us. As we approached the mouth of the Saguenay about 4am, we were facing an ebb tide, and so we were against a 4 knot current for a short while, meaning we were only making between 2 and 3 knots of speed.


However, by 6 am we had entered the River, passed Tadoussac and anchored at Anse à la Barque, a mile upriver from Pointe de l’Islet on the north bank. We made breakfast and had a nap. The tide was dropping so although Jay had a great nap, I had trouble sleeping as we had to anchor so close to shore in this deep cove. I was curled up in the cockpit and when i would open my eyes and se the shore so close it would give me a start.
By 11am we had pulled anchor and set out further upriver. The Saguenay fjord is beautiful. The river banks tower 300 metres high. The water is 900 feet deep in many places.  You can navigate 68 miles of the 93 miles of the Saguenay River.  Commercial ships do go as far upriver as La Baie, but navigation is easy as the river is between 0.6 and 2 miles wide and is very deep until right up close to shore.


Much of the area is within the Saguenay-St. Lawrence Marine Park and marine life is abundant. It wasn’t long before we spotted belugas. These whales are 10-16 feet in length and can weigh 700-1500kg. They are highly protected so you cannot go looking for them. When you see them, you cannot approach to within 400 metres. If one comes within 200 metres, you should halt and wait for it to move on before continuing.  But they are amazing creatures. I must say, I have missed seeing marine life while in the Great Lakes. 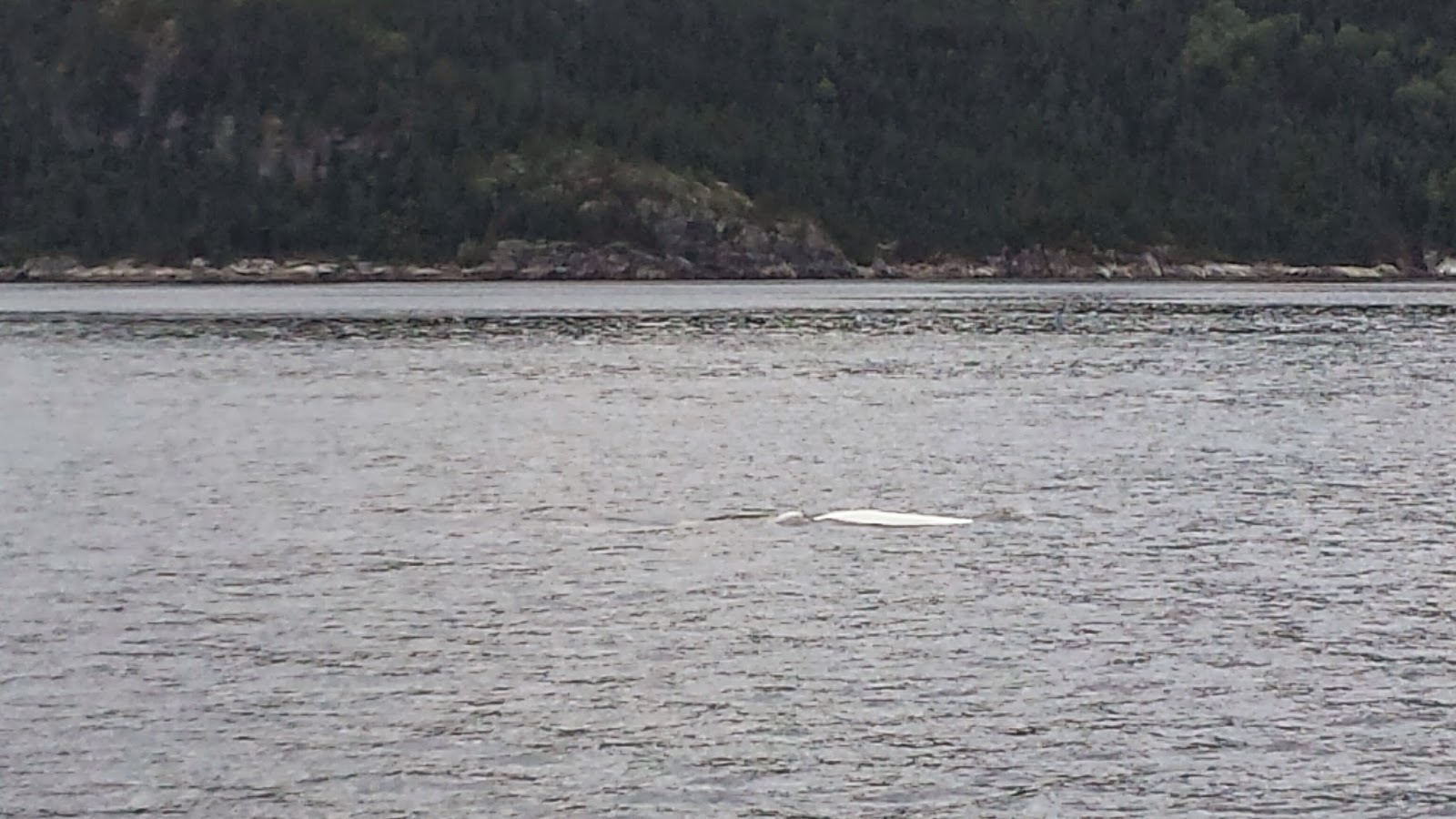 Around 2pm, we were caught in another thunderstorm and very heavy rain. Visibility was very poor, so we entered Anse St. Jean and anchored for the night. By 3:30pm, the last of the rain had passed and we enjoyed a very calm and beautiful evening. The tide range was 15 feet, so we anchored carefully to make sure we would not be aground in low tide. The bay is several hundred feet deep, except right close to shore, affording a small area which is shallow enough to anchor, but which will still have water at low tide.
This morning, we pulled anchor and travelled 9 miles further upriver to Baie Éternité. This mile long bay is stunning, between Cap Éternité  and Cap Trinité. The water is so deep alongside the cliffs that you can navigate very close to shore as the sheer cliffs tower above you.  There is no good anchorage in this bay, unfortunately. The Park has installed mooring buoys, but only 4 of the 13 that are supposed to be there are actually still there. All the mooring buoys were full, so we circled the bay taking countless photos. 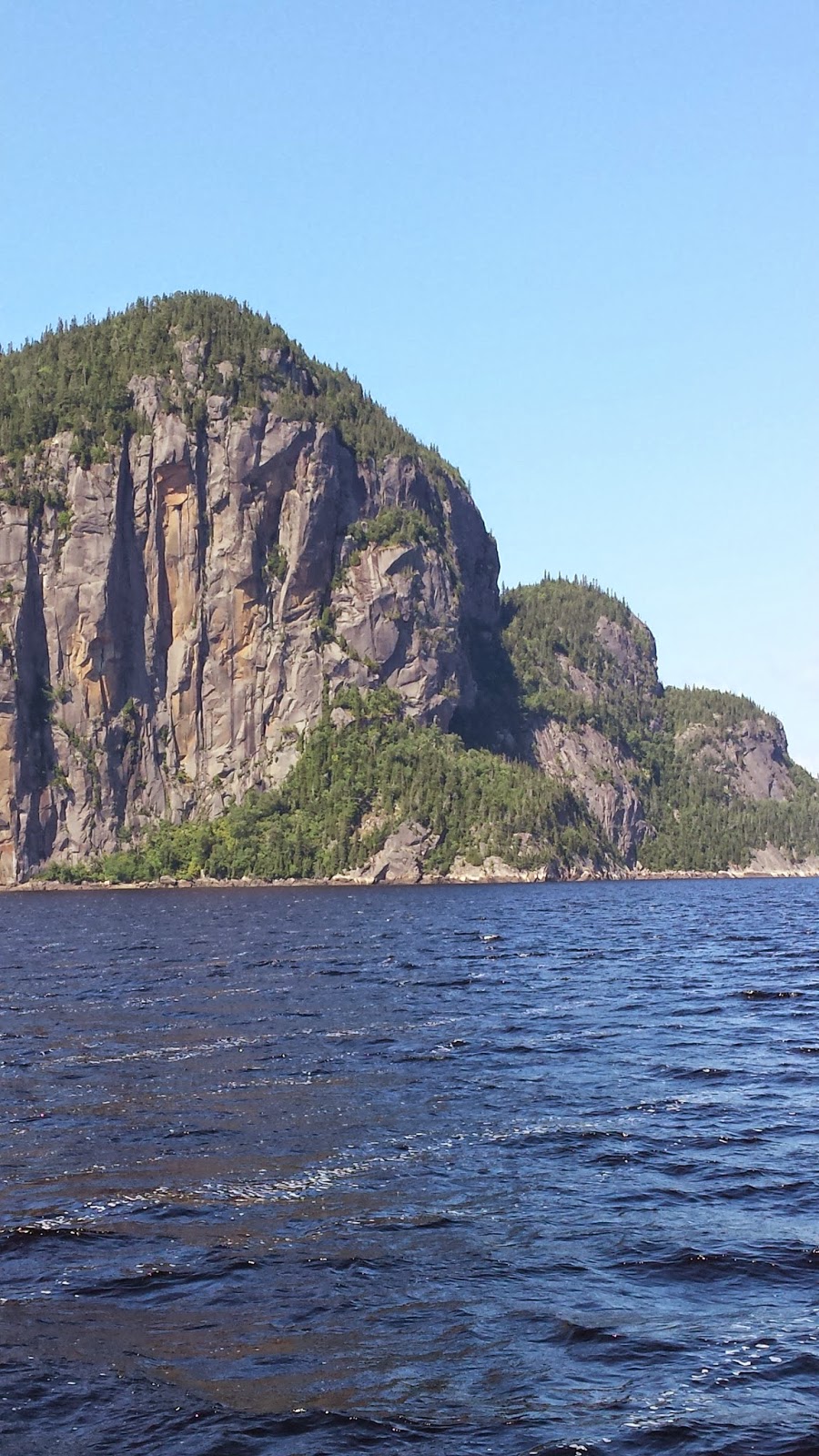 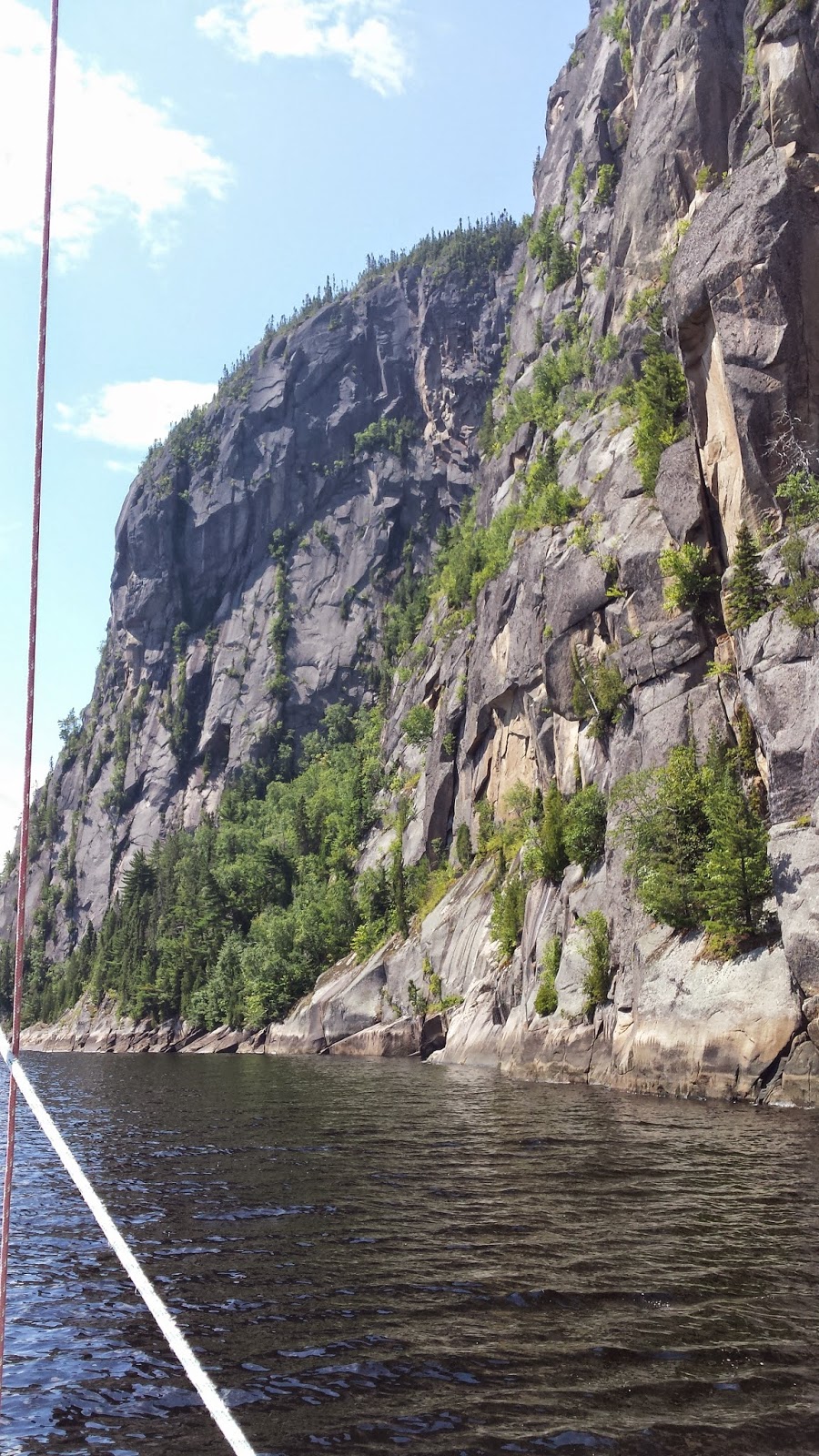 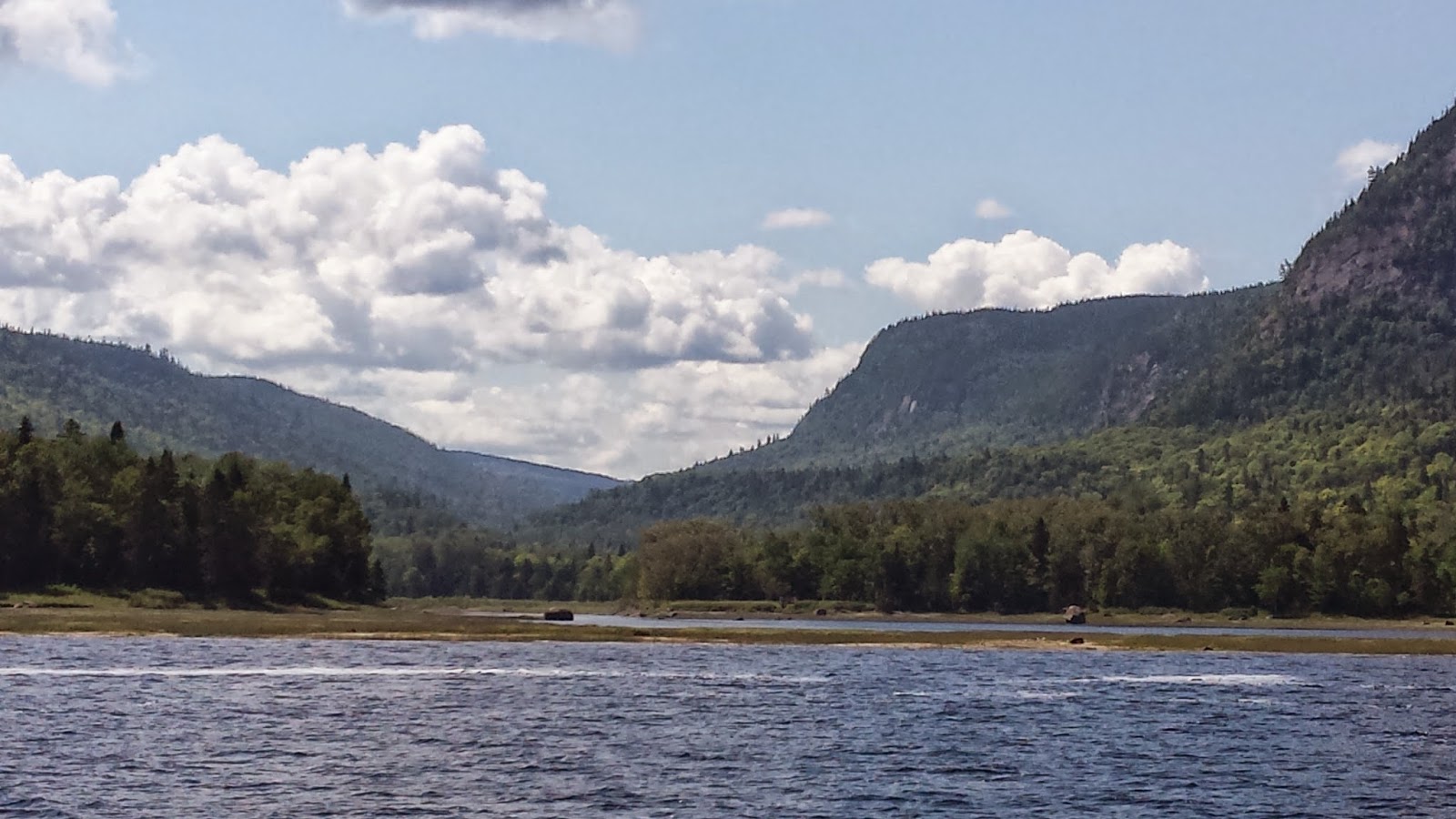 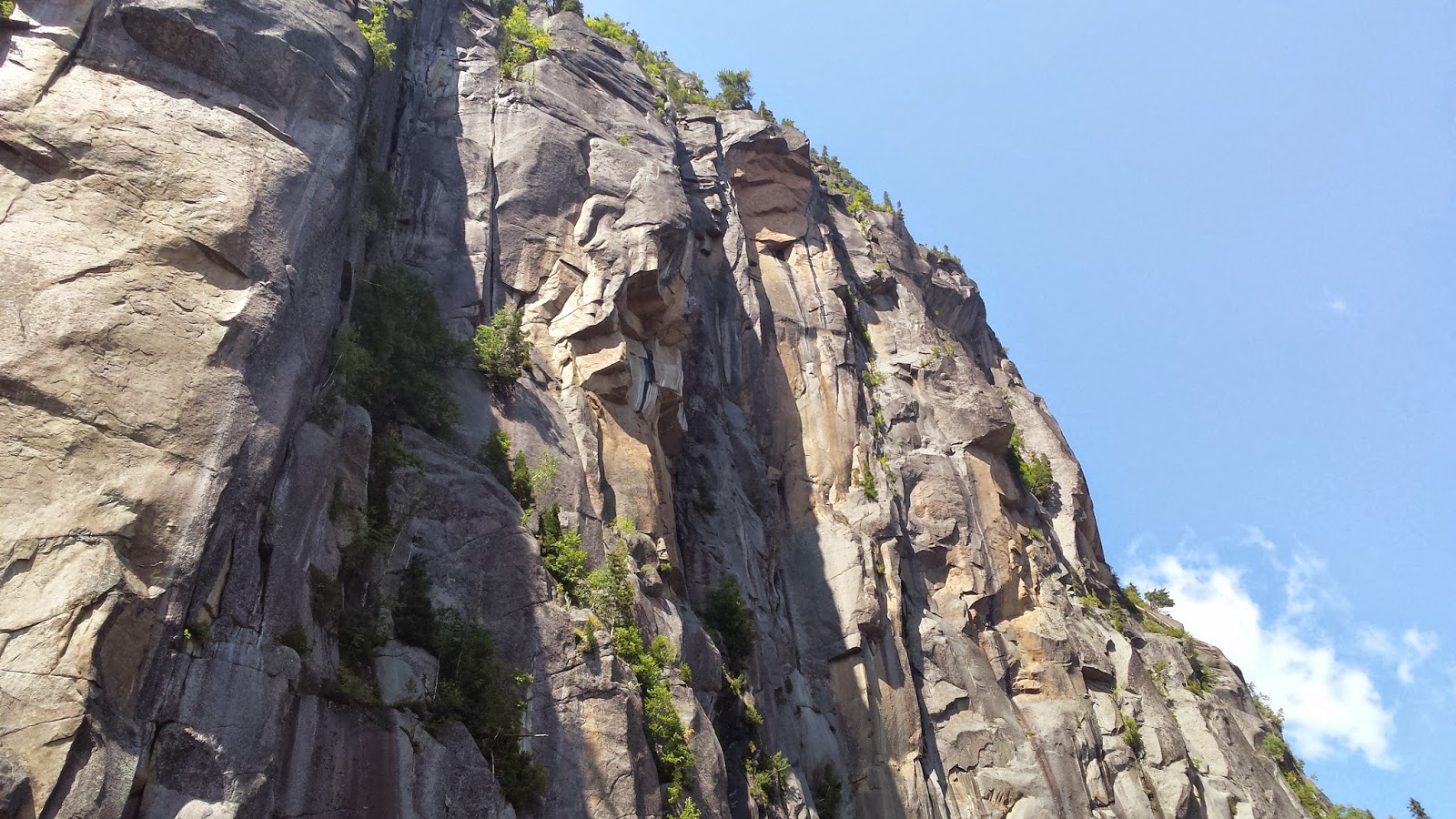 About 400 feet up on Cap Trinité there is a 32 foot statue of the Virgin Mary. It was rough hewn out of wood, coated with lead and hoisted to the top of the cliff in 1881.  About 300 feet higher stands a large cross.

At this point we decided to work our way to the mouth of the River again. On our way back, we were again able to observe some belugas.


In Quebec City, we had been docked next to a family from the region and they had marked up our chart with possible anchorages and had given Jay lots of great information. We always learn so much when we can get local knowledge about an area.  I write this post from one of the anchorages he had suggested to us – Anse aux Petites Îsles.  It is calm and peaceful. The sun has gone behind the cliff and will be setting before long. Jay is playing the guitar and all is right in my world. This detour has been very worthwhile!
Posted by Unknown