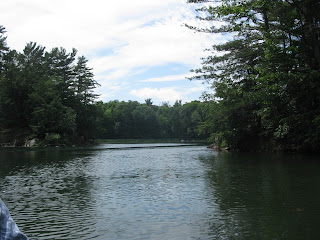 In the Thousand Islands group known as the Navy Islands, there is nice large anchorage to northeast of Stave Island and east of Hickey Island. If you approach from the west you can enter it several ways. We often enter by coming through Gananoque Narrows and then round the southeast of Stave Island and enter through a small channel. There are several rocks to pick your way around, but they are marked. The channel shallows to about 9 feet, but once inside you can anchor in about 15 to 20 feet. We anchored here several times last year and on the long weekend of July we thought we would try it again. When we arrived we were the only sailboat out of the 6 boats in the anchorage.

We put Ducky in the water and decided to explore. The cruising guide recommends dinghying through the narrow channel between Hickey and Stave Islands, through what is known as Molly’s Gut. According to the guide it is a major fish spawning and nursery area and you can see lots of fish, and so they recommend no motors in the passage. We motored across the anchorage and then turned off the engine as we entered the narrow passage. Our dinghy is only 8 feet long, so when you are rowing it is a bit hard for the other adult to stay out of the way. Nonetheless with some jockeying, Jay was rowing and I was hanging over the side, the camera close by, looking for fish.

The water is very clear in Molly’s Gut and the two islands rise up on either side, with lush trees overhanging the passage. How beautiful it was. The afternoon sun was slightly shaded in the narrow passage, and a silence seemed to fall over us as we made our way up the Gut, drifting more than rowing.  I was enjoying the peace and beauty around us. However, despite our clear view of the weedy bottom, we discovered the fish were rarer than hen’s teeth. We saw nothing moving beneath us. Jay was ready to turn on the engine, pointing out we could hardly disturb something that wasn’t there. I resisted, still hopeful that we would see something.

There is a small marsh area on the west side of Hickey and Jay gamely rowed on, our little rubber dinghy plodding along, sweat starting to bead on Jay’s forehead as the sun emerged from behind the islands.  Every time Jay mentioned he wanted to turn on the engine, I asked him to wait just a little longer as I continued my vigil for the elusive fish.

We were almost across the marsh when a pontoon boat, both its outboards chugging along, entered from the far side of Curtis Island. They waved merrily to us as they sped by and entered Molly’s Gut without killing their engines. The occupants of the pontoon boat had apparently not read the cruising guide about no motors in the Gut. Either that or because no one had been reading the guide, the fish had packed up and moved elsewhere and we were the only ones who did not realize there was nothing left to protect. As the sound from their engines faded in the distance, Jay looked at me as if to say, see now we can turn on the engine. He reached for the pull cord on the engine.

Before Jay could pull the cord, we noticed a flash of white in the tall grass along the shore of Curtis Island. Now it was Jay who let his hand fall from the engine pull cord as we watched the swans usher their small ones deeper in the weeds. I reached for the camera, as Jay tried to row us closer, but we were not able to get a really clear view without getting too close. After a few minutes of watching the graceful swans, Jay rowed us out the other side of Curtis Island and we motored back to the anchorage. Even though there were no fish, leaving the engine off had still afforded us a glimpse of the peace and graceful beauty of the swan family.
Posted by Michelle