On July 11th we headed out for a week of sailing, exploring anchorages west of Collins Bay in Lake Ontario. We couldn’t leave until I had finished work for the day, so it was early evening when we left the dock. That meant our first night out would be Kerr Bay, the closest anchorage to Collins Bay. We had a nice sail to Kerr Bay in 14 knot winds.

The next morning I finished up some last minute work I needed to complete and we left at 1pm. Winds were light, 3 knots, and the temperature was nearing 30 degrees Celsius. We motored up Adolphus Reach, grateful for the small breeze created by our apparent wind. As we approached the bay leading in to Picton we could see about 80 or more sailboats of all sizes competing in the EYC regatta. The wind was now about 8 knots, and spinnakers were flying. As the wind picked up, we turned north and the wind was now dead on our nose. Alas, the fate of cruisers it seems. We motored up Long Reach to Desoronto. It was approaching 5:30pm when we arrived off Desoronto. Winds were light so we anchored off Forrester’s Island. The water looked a bit brown so we decided not to swim, but made supper and relaxed for the evening.

The next morning, July 13, we did a few boat chores and then around 11am pulled anchor and headed towards Trenton. It was hot and sunny and the winds were about 7 knots so we were motorsailing. While passing through Telegraph Narrows we met almost 100 speedboats participating in a poker run. It was a bit daunting to look behind you and see them stretching out in what seemed to be an unbroken line racing full tilt towards you. Around 2:30pm we decided to anchor and dropped the hook off Indian Island near Trenton. We relaxed for a bit and then decided to stain the cockpit seats. In the heat with the small breeze they were dry to the touch in no time. 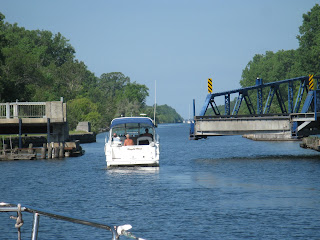 On July 14th, we pulled anchor around 9:00am and motored in light winds to the entrance to the Murray Canal. From the Bay of Quinte, the Murray Canal leads 5 nautical miles into Presqu’ile Bay. The Canal operates from about 9am until 4:30pm and costs $5. There are two swing bridges to pass through. As you approach the Brighton Road Bridge, they hold out a small bucket on the end of a long pole and you deposit your money in it as you motor past.   It was another hot and sunny day with light winds so we alternately sailed and motorsailed out of Presqu’ile Bay and into Lake Ontario. We had a lovely pasta lunch ghosting slowly along under sail around 1pm. Around 4pm we arrived in Coburg. We anchored in the lovely harbour inside the breakwater and dinghied in to shore. The marina charges $12 a night to anchor there and use their facilities. The marina is run by the town and has good facilities, including laundry. We decided to stay a few days and explore Coburg. 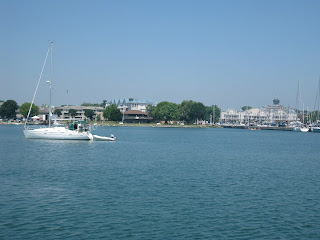 Coburg is 56 miles east of Toronto. It has a lovely long sandy beach on the waterfront, a marina, food and other provisions within walking distance and lots of nice restaurants. One of the neat things are the upright pianos found on street corners in the downtown. Whimsically decorated, these pianos are there for the use of any passerby. We enjoyed seeing them and listening to people with varying levels of talent tickle the ivories as we strolled the downtown.  We had a lovely dinner one night on an outdoor patio with live music and had fun popping in to the shops, geocaching and exploring the downtown.

After two nights we had a decision to make – further west or return east to meet up with friends for the coming weekend. Friends won out and around 11am on the 16th, we topped our fuel and water tanks and headed from Coburg back east. Again it was over 30 degrees and sunny as we headed back to Presquile Bay. We arrived too late to make the Murray Canal, so we anchored in the Bay, which was full of swans. The winds picked up to gusts of almost 20 knots before dying down to light overnight, but despite the weedy bottom our anchor held nicely. We watched a movie on the laptop in the cockpit and enjoyed the sunset on another beautiful day.

On the 17th we made our way through the Murray Canal and past Trenton and Belleville to Picton. We stopped just after lunch to try and assist a 32 foot sailboat that had run aground, but they were hard aground and our dinghy motor was not powerful enough to make a difference. As we waited nearby for the auxiliary Coast Guard to come and help them, we watched a large thunderstorm pass by to the north of us. If we had continued without stopping to assist the other sailboat, we would have been right in the middle of heavy rain and lightening. After the other boat was safely off the rocks and underway, we made a late lunch then continued east. We arrived outside of Picton around 6pm and anchored. 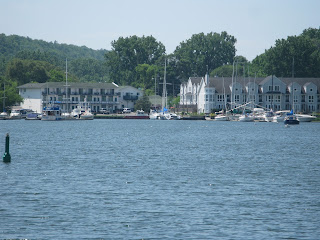 The next morning we took the dinghy into Picton, about 1.5 NM each way, and had breakfast. We wandered around Picton, picked up groceries and popped into a few shops then headed back to My Obsession. Realizing we were in need of a pumpout, we motored My Obsession in to the town dock in Picton. This was made more difficult when the key to open the sewer and water tanks broke. It was so hot, the rubber had swelled and the keys did not want to turn. We solved it with running cold water over the top until it shrunk enough it would turn. Then we headed to Kerr Bay to rendez-vous with our friends, Alison and Steve and their boys.

That night we visited aboard our friends’ boat, playing cards until the whole anchorage was quiet. About midnight we were ready to return to My Obsession. I did not want to awaken the whole anchorage by turning on the motor, so I convinced Jay to sit beside me and paddle Ducky back. It quickly became clear our rubber Ducky was not meant to be paddled. Jay was taking one stroke for every two or three of mine and we were not moving in a straight line. Chagrined that I was doing all the work, I asked him to paddle. He started paddling and immediately we turned in a full circle. Obviously his strokes were stronger than mine. You know that feeling when you are trying to be quiet, but you really just want to laugh out loud, and so as you try to muffle your laughter it just becomes harder and harder and everything seems even funnier? Well it struck me at that moment. There I was laughing so hard I was doubled over, unable to paddle at all and afraid I would wet myself from laughing so hard and Jay was still paddling us in a circle. He stopped paddling and just looked at me. Then he broke out into laughter too. After a minute we got ourselves under control and managed to paddle past two other boats to ours and get ourselves aboard.

July 19th was hot, but very windy. The wind was gusting in Kerr Bay to 30 and 35 knots. We were reluctant to leave the boat as several boats were dragging, ours included. The night before had been light winds and we had not let out additional scope when the winds picked up the next morning. We were sitting in the cockpit enjoying a coffee when we noticed we were dragging. We quickly hauled up the anchor and moved to the other side of the Bay to reset. At the same time, a 33 foot sailboat pulled its anchor to reset. They moved to the side of the bay we had just come from. They sailed figure eights and back and forth across the bay for 15 minutes. There was a couple aboard and the guy kept running from the bow to the cockpit to speak to the woman who was on the wheel and then back to the bow. One or more of them must have been inexperienced because there seemed to be a lot of wild gestures and yelling and circling. It took them almost a half hour to rest their anchor. I kept a close eye on them the rest of the day as I was afraid they would drag again.

It took two tries before we were comfortable our anchor would hold, now with double the scope out. But we had a small almost disaster. As we had pulled up the dragging anchor I had notice the line and the life ring were not in place on the stern. I prudently put them back on the holder and made sure that Ducky was pulled in close so that the dinghy painter could not get caught in the propeller. After we had managed to reset the anchor to our satisfaction, I glanced over my shoulder and saw that the life ring line was taught and was stretching under the boat.  The wind had tossed us around a bit as we crossed the Bay and the line had fallen again into the water unnoticed. As I had not felt anything different with the wheel or the engine I hoped it was not badly tangled. I called Jay back from the bow with that hint of panic in my voice which always brings him in a hurry. We dug out his snorkel gear and he slipped into the water. Luckily, it had obviously just happened right before I had killed the engine and it was not tightly wound. He was able to unwind it without cutting the line and after inspection of the prop and shaft, we were relieved to find no damage. Crisis averted. There were some heavy winds and thunderstorms that evening, with gusts to almost 40 knots, but the anchor didn’t drag.

On July 20th we spent the morning swimming and visiting with our friends and then around 1pm they headed back in to Collins Bay and we headed to the Thousand Islands. We had only two nights left of vacation, but weren’t ready to go back yet. As we were passing the Thousand Islands Playhouse in Gananoque I mused aloud that I wondered what was playing. A quick phone call later and we were changing course to head towards the Playhouse. They had tickets available to the play and they had room on their dock. Only challenge was the show was at 8pm and it was now 7:25pm. We quickly found our fenders and docklines, and pulled up. Theatre goers on the patio overlooking the water must have wondered at us as we pulled up, scurried around to make My Obsession secure and cleaned ourselves up enough so we were presentable to attend a play. The play was great fun and we walked into town for a late dinner afterwards. The night was a bit bouncy as the dock is not well protected and any passing boats kick up a wake, so I probably wouldn’t stay on that dock overnight again.

The next day we headed back to Collins Bay, anchoring off Milton Island for lunch and a nap. By 6pm we were in our slip, having recorded 243 NM for the week and sorry the adventure was at an end.
Posted by Michelle