April 27th was move aboard date this year. Collins Bay Marina was pretty empty for the first month. Very few boats were in the water on B dock until June.  Although we didn’t take our first weekend sailing until May 18th as Jay was away at the beginning of May, we head out sailing almost every weekend in the summer and anchor for the weekend. In May popular anchorages are almost empty. These same anchorages in July and August are packed.  Here are some of our weekend anchorages from our early summer weekends and a few notes about them.

In late May we anchored off Beaurivage Island, one of the islands in the St. Lawrence Islands National Park. This anchorage is at the west end of Wanderers Channel, which winds its way through the Admiralty Islands group. Tour boats from Gananoque use Wanderers Channel as it is very pretty, making the anchorage a bit bouncy by times as they pass, but it is a nice anchorage. If the wind picks up from the southwest, you need to be wary as the shelter is mediocre. You can enter this anchorage north of Bostwick Island or south of Beaurivage Island, but you must pay attention to the charts and pick your way in among the rocks. One of our favourite things to do in here is dinghy around Bostwick Island to Half Moon Bay and the small open air chapel. It is very pretty and very peaceful.

We followed this trip with a weekend at Prinyers Cove, on Prince Edward County, about 17 NM west of Collins Bay. This is a very protected cove with good holding. However, it is getting difficult to anchor as there are so many mooring balls in the cove. If you arrive early in the day or are there early in the season it is less crowded.  We have since heard that the authorities are asking cottagers to remove mooring balls as it is getting out of hand. 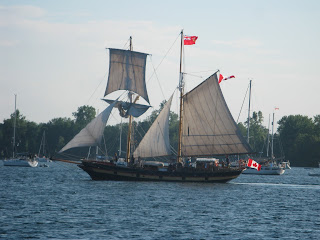 In June we also popped across to Kerr Bay on Amherst Island. This large bay is sheltered from prevailing southwest winds and is a short 6 NM from Collins Bay.  Although the bottom can be weedy, it is good for swimming and can hold lots of boats. We anchored in there with the tall ship, St Lawrence II, several times this summer.
Posted by Michelle