After some serious and difficult consideration, we decided to spend another day in Newport.  All right, it took about two minutes to decide to stay longer than originally planned.  What can I say, we both like it here.

We've made good use of a facilty here called the Seamen's Church institute.  This is a facility set up to serve all sea farers.  For $2, you can get a nice hot shower.  Breakfast and lunch are available for very reasonable prices.  Laundry facilies are available. There is even a chapel and a beautiful library.  Although we do have a shower on board, hot fresh water is at a premium while we're out on a mooring.  The hot water heater on the boat works in two ways - by electricity or by using the engine heat.  Well, at a mooring we don't have the option to plug into shore power, and we don't have the engine running.  Hence, a limited supply of hot water.  So, we've really appreciated being able to take a shower in the mornings.

We started by making a run past the Maltese Falcon.  This really is a beautiful and amazing ship. 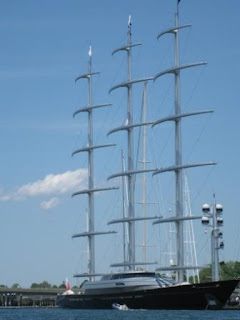 In the afternoon, we decided to make a trip out to the West Marine here in Newport.  There were a handful of items we have wanted to pick up for a while, but there in not always a convenient marine store.  There is a marine store here in downtown Newport, but it is small, so we wanted to go to the larger store.  It is about three miles from downtown, so that meant taking a cab.  The cab was waiting while we were inside, so we quickly recruited one of the salespeople to help us find what we were looking for.  We let her know we had a cab waiting, so we were in a rush.  The three of us were running around the store, picking up items from our list.  We lucked out, and had approached one of the managers, so she actually gave us a discount on a couple of the more expensive items.  I think she was having fun as well, running from one end of the store to the other, trying to minimize the time we spent inside.

Also, I've been going through a bit of hockey withdrawal.  It's Stanley Cup Final time, and for the first time in a long time, a Canadian team is the favourite.  So, last night, we decided to give Ducky a rest and called the lauch service.  They came and picked us up and we found a pub showing the game, so I got to see Vancouver take game 2 over Boston.  This is definitely Bruins territory, so we were the only ones in the place cheering for Vancouver.  But, we were also the only ones going home happy.

When we went out, I wore my St Peters Fire Department shirt.  It's a collared shirt with the crest on the breast, and is quite a nice and comfortable shirt.  While we were in the pub, I had someone come up to me and ask if I was a firefigher.  When I answered yes, he shook my hand and expressed his appreciation for the fire services.  It's always a nice feeling when something like that happens out of the blue.

Besides its sailing tradition, Newport is also famous for its mansions.  This was where the rich and famous industrialist from a century ago would come to get away, and did they ever leave their mark on this city.  Some of these buildings are breathtaking.  Most of these old houses are open for tours.  We didn't take these tours this trip, but it will be a priority next time we are here.

Anyway, tomorrow we are moving on again.  We are planning on anchoring in Hadley Harbour, south of Cape Cod.  The day after that we'll travel throught the Cape Cod canal and move up to Provincetown, Mass.  We've enjoyed our brief layover in Newport, and will definitely be back again.
Posted by Jay