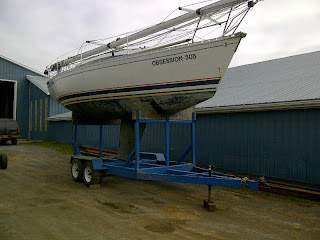 This weekend, we finally said farewell to an old friend.  After being on the market for two years,

Selling a sailboat is rarely a short process.  Unless you are either lucky, or are willing to sell for well below market value, you cannot bank on a quick sale.  There is a ilmited market for sailboats, particularly in Atlantic Canada.  We knew this when we decided to make the decision two years ago to upgrade to My Obsession, but it's still a relief to finally have a sale.

For the past two seasons, we've still been taking care of our old boat, mainly by making sure she was stored indoors for the winter.  That meant bringing it out and towing it to our yard for the summer.

Since it was stored in an old barn, and then kept outdoors for the summer, it would tend to collect some dust and dirt.  So each fall, we would give her a cleaning, make sure that the batteries were charged up, then haul it about 15 km back into storage.

About three weeks ago we had a call from our broker that there was someone interested, and they wanted to see the boat.  She was still in winter storage, so he came over from Newfoundland to see Obsession 305.

Obviously he liked what he saw, since he sent us an offer a couple of days later.  We quickly came to an agreement.  A few days later, the marine survey was conducted, and there were no problems.

When it was evident that the deal was going through, I flew home from Kingston.  We had the boat taken out of winter storage, and we lifted the mast on top of the boat and secured it for transport.  The next day, the new owner arrived from Newfoundland, hooked up to the trailer, and they were off.

We had a few years of great sailing memories on Obsession 305.  She was a great boat for us, and a perfect boat to introduce us to the cruising lifestlye.  We put many miles under her keel, touring around the Maritimes, vising many familiar places in an entirely new way.  It was with Obsession 305 that we built memories of traversing St Peters Canal, which I had crossed so many times growing up.  It was how we first passed under the Confederation Bridge, instead of driving over it.  It was how we explored the coastline of PEI, Nova Scotia and New Brunswick at an entirely different pace than touring by car.  Obsession 305 brought us to may towns and villages, which we explored on foot.  It was with Obsession 305 that we decided to make sailing such an integral part of our life, and figured out what boat we needed.

Although it was a lot of great memories heading down the road, after waiting for two years, it was still a relief to see her go.  We're very happy with My Obsession, which has greatly expanded our range and ability to stay aboard.  Obsession 305 was how we figured out what we wanted in a boat, which we found in My Obsession.

We just hope that her new owner builds more great memories with Obsession 305.
Posted by Jay