Another boating season is underway, and last weekend we made our first trip of the season out of our marina.  The weather has been fluctuating somewhat, since we're still so early in the season.  There has been a fair amount of rain and cold temperatures, which have kept us sitting at the dock.  But the long weekend was shaping up to have some great weather, so it was time to head out.

Last summer was our first in the area, and we were somewhat limited in our free time, so we only able to explore a few areas fairly close to Kingston.  But in that time, we did find some favourite anchorages within a short distance.  One of those is Beaurivage.

Beaurivage is one of the first members of the Thousand Island chain that we hit from Kingston.  We are very fortunate to be sitting at the start of the Thousand Islands, an incredibly scenic area of the lake, right where Lake Ontario empties in the St Lawrence.  It only takes us about three hours to reach this anchorage.

On Saturday, we were lucky to be joined by three friends from Ottawa.  We started the day by meeting them in Gananoque, where they left their car.  We drove out to meet them, brought them back to Kingston, and set out mid-morning.  Unfortunately, the wind wasn't cooperating.  In fact, it was non-existant.  So the trip was a motor trip instead of a sail, but even when we are forced to burn some fuel, this is still a great trip.

From our berth in Collins Bay, we passed by the city of Kingston, and pulled into Deadman's Bay, under the cannons of Fort Henry.  We anchored for a couple of hours for lunch, then continued on.

The Bateau Channel runs between the mainland and Howe Island.  Passing between the land masses is more scenic than the main channel, with only small boats using this passage.  At the end of Howe Island, suddenly you are in the midst of the small islands of the Thousand Island, with the first little taste of why this is such a popular cruising ground.  Beaurivage Island is right in front of you when you come out of this channel, with the anchorage around the back side of the Island. 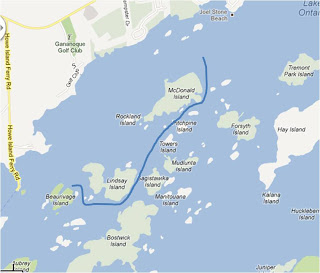 But before anchoring, first we continued on the Gananoque to drop off our friends, so we took the Wanderers Channel.  This picks its way between many of the small islands in the area.  When we first arrived here, we stuck to the larger channels, until we realized that even the large tour boats were passing through this area.

We've made this passage quite a few times now, but the first few times were quite uncomfortable.  In places, you're passing midway between the islands, with about a boat length on each side.  You can see the rocky ledges coming off the shore of the Islands, but by sticking to the middle of the channel, there is plenty of depth.  Very different from Prince Edward Island, where every land mass has a protruding sand bar, and it's almost impossible to get anywhere close to shore.

On the other hand, running aground in PEI is a soft landing.  Here, it is solid rock.

This area really gives a great taste of the Thousand Islands.  The islands here are fairly small, no more than a few hundred feet in length.  Most of the islands are home to cottages.  These cottages are, almost without exception, quite nice.  On some of the smaller islands, it seems the cottage covers the entire available space.

After dropping off our friends, we went back to Beaurivage.  This is a very popular anchorage, and you often have to pick your way between boats to find a spot.  However, this early in the season, there were only a couple of other boats.

Our intention was to stay here for night then move on to another spot.  But, as so happens here, we spent Sunday lying around and reading, having a very relaxing day.  On Monday, we pulled up anchor, and as the winds still hadn't reappeared, motored our way back to Collins Bay.
Posted by Jay