One of my biggest concerns when crossing from Maine to Nova Scotia was the possibility of fog. How can you sail when you can't see where you are going? However, we had a clear passage across the Gulf of Maine with nary a wisp of fog. Yet, on this second leg of the trip we have seen little of the coast between Shelburne and Chester as the sothwestern shore of Nova Scotia has been shrouded in fog almost every day.

We left Shelburne late in the morning on Wednesday as we waited for the fog to dissipate. However, Shelburne is quite far inland and though it had retreated from the town, it was lying in wait just offshore. It wasn't long before we were into the middle of it. The land disappeared behind a misty wall of gray as we set course for Port Mouton. Trusting in our radar and GPS/chartplotter, we set course and strained to see though the fog. Its thickness varied with sometimes as much as a mile of visibility, but more often about a quarter mile.  Even those few times that we brushed near the coast, it was no more than a vague outline. 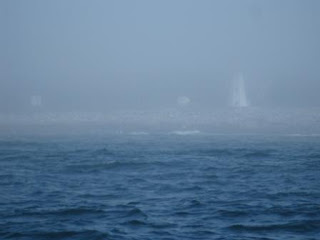 Because we had gotten a late start, it was after 7pm when we entered the bay of Port Mouton. Following the western channel between Port Mouton Island and the mainland the fog grew so thick it was as if we were slicing through it. The visibility was reduced to about 200 feet. Although it wasn't raining, as we passed through the fog, it condensed on the boat, leaving huge droplets of moisture. The narrow channel shallowed to about 15 feet, more than the 6 feet reported on the chart. Our trusty Garmin and C-Map guided us through and as we rounded Spectacle Island and approached Carters beach, the fog cleared enough so we could see the surrounding islands and shore. The water was about 40 feet deep, unless you went into about 100 feet offshore. Having lots of chain and rode, We stayed out further and dropped anchor. Due to the depth and the hard mud bottom, it took three tries before we were sure the anchor had set properly. Shortly after we had settled in, the fog came rushing back, obscuring the pretty beach.

The next morning we lifted anchor about 8:30am and headed for historic Lunenburg. The sun was shining and the fog had receeded. Yet, as we left the bay, it was again lying in wait. At one point, we heard a horn and set off a blast from our own hailer before we were able to confirm it was a horn on a lighthouse and not a ship. What an eerie feeling to be so totally surrounded by a wall of fog that you feel completely adrift.

As we entered Lunenburg Bay, the fog receeded and the sun thawed our chilled bodies. We could feel a warm breeze from the land. Lunenburg is such a pretty seaside town, its colourful buildings just can't help but bring a smile to your face. We took a mooring in Lunenburg Harbour and dinghyied to shore. We enjoyed the late afternoon wandering the small shops and returned to the boat for a beautiful sunset. The Bluenose II is currently in drydock undergoing a major refit, but the Picton Castle and several other ships were in harbour. 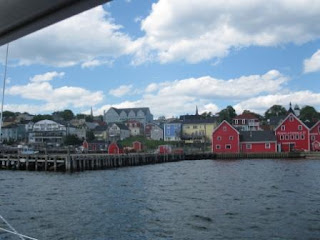 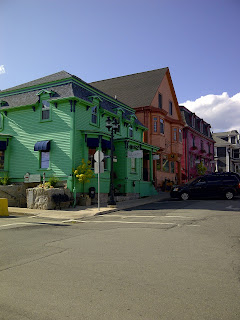 Although we would have liked to linger in Lunenburg, we had an appointment to have the new name applied to the boat the following day in Chester so we left early the next morning for the short trip to Chester in beautiful Mahone Bay. Thankfully, the fog stayed further offshore and we enjoyed the beautiful coastline as we made our way in to Chester.
Posted by Michelle