Friday, July 8, 2011 is a milestone date for our new sailboat.  This is the day that she shed an old name and gained a new one. 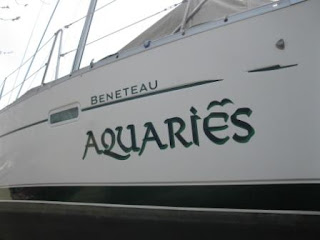 The previous owners of the boat had christened her "Aquaries" - a reference to one of them having the astrological sign of Aquarius, and one having the sign Aries.  This served her well while they owned her, but didn't apply to us.  We have over the past few years grown attached to our "Obsession 305", even incorporating it into the name of our blog.  So, we decided that we wanted to keep the "Obsession" reference in the new name.  After considering multiple possibilities, consulting with friends and family, checking the Canadian ship registry, and even a debate or two amongst ourselves, we settled on the new name:  My Obsession.

However, when we picked up the boat in New Jersey, of course she had the old name across her hull, and we didn't want to take the time to put the new name on right away.  However, while we took our two week break from sailing, we were referred to a couple in Chester, NS who do boat names and decals.  We contacted them about updating the boat name while we were in the area.  On Friday, July 8, we pulled into Stevens Boatyard in Chester, where we were met by Ray and Deborah and the new decals for our boat.

Normally, they would be applying boat names while the boat was up on the hard during the off-season, but they agreed to rename our boat while she was in the water.  It seems that applying the decals is much more difficult when the boat is rocking up and down, and trying to either drift away from you, or trying to pin you to the dock, however, they did a wonderful job, the result of which can be seen in the picture below. Thanks to the Sign Guy! 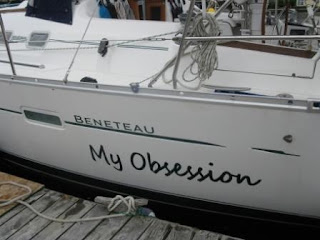 Now, for anyone who has spent time on the seas, applying the new boat name is only half the job.  It seems that Neptune, the King of the Oceans, dislikes anyone who disrespects a sailing vessel by trying to erase a name.  No sailor wants to face the wrath of the Lord of the Deeps when they are far from land.  So the only way to avoid bringing bad luck down upon you is to make an offering to the Sea.
Now, as luck would have it, we had the perfect offering for Neptune.  Last year, when my parents were South Carolina, they came upon a bottle of wine from a small, local winery called "Obsession".  They thought it was perfect for us to enjoy on our boat, so they brought a bottle back for us.  The problem is that Michelle didn't want to part with the bottle, so it remained unopened for over a year.

Here was the perfect opportunity to break open the bottle of "Obsession", and use it to re-christen "My Obsession".  So, after we moved off to our mooring for the night, we made our way up to the bow with the bottle of wine and two glasses.  We poured a glass for each of us, asked Neptune for his blessing, toasted our newly named "My Obsession", took a drink, and poured the rest of the glass over the side as an offering to Neptune to grant his favour upon our voyages.

I hope Neptune enjoyed his offering.  It was actually a pretty good wine, and we enjoyed the rest of the bottle before making our way to shore to enjoy a good meal and an evening of theatre at the Chester Playhouse.
Posted by Jay