So here we are at the end of day three of our trip home with our new boat. It is Monday evening, about 9pm and the water is calm, lights from the surrounding communities reflect in long streaks across the water. A light breeze is blowing through the cockpit, a welcome respite after a hot day. We are on a town mooring tonight in Part Washington on Long Island.  The town has several moorings balls which they provide free for up to two nights to transient boaters. But let me pick up the story from where Jay left off.


On Sunday morning, we weighed anchor about 7am and exited Barnegat Inlet out into the Atlantic Ocean. Barnegat Light, the second oldest lighthouse in continuous use in the United States, stands as a silent sentinel marking the narrow entrance.  The wind was fairly light, so we motored past the Light. The long jetty opposite the Light held twenty or thirty campers, truck campers and fishermen.  We were not the only boat heading out into the Atlantic. Several recreational fishing boats passed us on their way to spend a Sunday fishing.  Before long, we were out in the Atlantic and turning north. Because the wind and waves were so calm, we decided to follow the shore buoys about a mile and a half out. The day was hazy with early morning fog. Before long, the bottom of Barenegat Light was obscured.  The day remained calm and what wind did exist was on our nose, so we ended up motoring.  It was our first chance to use the autopilot and wow was it wonderful! Definitely like having an extra pair of hands aboard. We chatted, listened to music, read and kept a constant lookout as there were there was many times more sea traffic then in the Northumberland Strait. Mid afternoon, we rounded Sandy Hook and caught our first glimpse of Manhattan in the far distance. We turned in towards Atlantic Highlands on the New Jersey shore and headed directly for the marina for a diesel and water top up. We hung around the fuel dock for 15 minutes waiting for a space, It gave Jay a chance to practice reversing the boat. We pulled into the fuel dock without incident with the help of a friendly dockhand and took on fuel and diesel. We left the dock and went east along the coast to just outside the mooring area and anchored amongst several other boats, two of whom were Canadian flagged.


After anchoring, we unhooked the dinghy, attached the motor and headed for the dinghy dock to explore. We spent several hours ashore, stretching our legs and picking up a handful of groceries. We returned to the boat just before dusk and made supper. We stretched out in the cockpit and relaxed. We could hear fireworks, but the hills ahead of us were hiding them from view. The night before in Barnegat Inlet we had watched fireworks from the cockpit and earlier tonight as I started tying this someone one was setting off some fireworks in their back yard. It is Memorial Day weekend here and Americans know how to celebrate the holidays. But just as majestic as fireworks was the Verazzano Bridge all lit up in the distance and the skyline of Manhattan.  Our biggest disappointment was the lack of internet signal.


This morning I woke up at 6am and climbed out into the cockpit to make sure all was well. The sky was filled with dark clouds and the wind was picking up. I went below and mentioned to Jay that I thought rain was coming and started to close the forward hatches. Before I even had the fist ones closed the rain started.  A full blown rain and wind storm was upon us momentarily. We heard thunder in the distance and saw two flashes of lightening, but it passed farther to the east of us.  After about an hour the rain stopped and the wind died off. We were taking our time getting underway anyway as we wanted to time our arrival at the infamous Hells Gate where the East River takes a hard turn and the current can reach 5 knots or more.


We left our anchorage about 10am. The sky was still a bit cloudy but the warm sun foretold another blistering hot day. We were glad to be on the water. As we rounded the breakwater out of the anchorage we set the sails and spent the next hour speeding across the water at 6.5 knots. However, it was not to last. Just over an hour later we were almost becalmed. We motorsailed for a short period and then decided to furl them in and go under power. However, our forward progress was hampered  by a 2 knot current exiting the Narrows. We didn't push the engine as the we knew we would be too early for Hells Gate if we did. 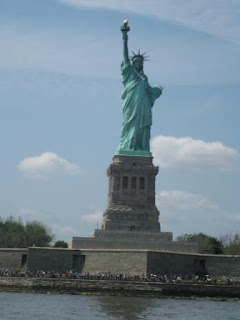 As we came under the Narrows Bridge we got our first glimpse of the Statue of Liberty. It was hot and sunny by now and her flame gleamed brightly in the sun. Neither Jay nor I have visited New York City and here we were seeing the green lady herself from the water on our new sailboat. The Harbour was bus y with commercial traffic, freighters, tugs, barges and ferries, Coast Guard, power boats and sailboats of all sizes and shapes. We passed in front of the Statue of Liberty and then in front of Manhattan before entering the East River. The majesty of the buildings had me a bit awestruck. I was also acutely aware of the noise. Choppers and planes were constantly over head and boats were roaring by with no concern for the wake they caused a sailboat. You could often hear traffic noise as well.


As we proceeded down the East River, the current finally had turned in our direction. Although our boat speed was 5.6 knots the speed quickly climbed to 7 knots, then a sustained 9.8 knots. Once we even saw a high of 10.6 knots!  No wonder a sailboat needs to time a passage with the currents!  After passing through Hells Gate, we passed Rikers Island and La Guardia airport. Before long we had passed Throgs Neck and were out into Long Island Sound. We entered the beautiful Manhasset Bay, with gorgeous homes lining the  and picked up a town mooring about 6pm.


Again we untied the dinghy and took a spin into town. Although we had a nice walk, we only found one open wifi spot and we accessed email with our Blackberrys.  Perhaps tomorrow we will get an internet connection somewhere and we will post this.  In the meantime, I am going to sign off and enjoy the beautiful evening in the cockpit.