We enjoyed a nice evening in the cockpit last night. The slight evening breeze kept the temperature quite comfortable. The water lapped gently against the dinghy. Several fish were jumping, and there were only a few lights on nearby boats. Most boats appeared empty.  About 10:30pm we turned in for the night. We had walked miles around Port Washington earlier in the evening and we were tired.

Now, I am a terribly light sleeper, so it doesn't take much to wake me up. About 3am.I awoke to this rustling, flapping sound. I would hear it for a 10 seconds or so, then all would be quiet for another 15 seconds and then it would start again. All the hatches were open and I could hear the noise quite clearly. As usual Jay slept soundly beside me. It is no wonder I am always on anchor watch as he would never hear an anchor drag alarm. Oh, to be able to sleep that soundly! But alas, that is not my fate. So that is why at 3am, it was me lying awake hearing these noises. My first thought was that maybe a jumping fish had landed in the dinghy. My second thought was that maybe a bird had entered the cockpit. Now before I go any further, there is one thing you need to know about me. I am petrified of birds. Not just a little afraid but we are talking borderline phobia. If  a bird was trapped in the cockpit and not able to find its way out with the bimini, dodger, and supports for the davits, then maybe that explained the intermittent noise. It could be birds wings. The hatch was open just above my head. Would a bird poke its beak in, I wondered? Having worked myself up completely, I now needed to investigate. Jay was still sleeping soundly, oblivious to my anxiety. I crawled out of bed and went to the companionway. I climbed the first step and started to open the louvered doors. I stopped mid-reach. What if it was a bird in the cockpit? It might try and enter the boat.

There was no help for it. I woke Jay up telling  him I heard a noise and he needed to help me investigate. Which really meant, I was sending him up the compainionway stairs to bravely face whatever evil was in our cockpit while I cowered at the bottom of the stairs, ready to dash into our aft cabin and slam the door closed if necessary and abandon him to his fate. My brave husband opened the louvered doors and climbed out into the companionway. I waited tensely. "There is nothing in the cockpit," he said, with no trace of irritation for being woken up.

"Check the dinghy," I said. "Is there a fish in it?" As he moved to the stern, I heard a loud rustling of feathers, some irritated squaking and some definite chuckling from my husband.

"Our dinghy has been christened," he said. Apparently, it appeared to him that two ducks were getting it on in the dinghy with a third one watching. His presence had scared them off. In the morning all that remained of our nocturnal visitors were some bird droppings, which I am told is lucky, and several feathers.  So, Jay has decided to name the dinghy " Ducky". And every time he says it, he smiles.
I can't help but smile myself. 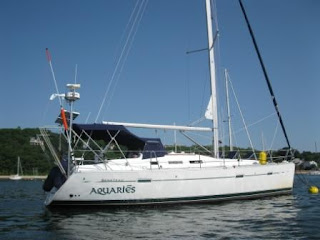 After our late night adventure, we slept in this morning and left from Port Washington about 9:30am. Wind was about 7-12 knots and I was hopeful we would get to sail. However, the wind was coming from the NE and we had to motor nose to wind all day, while boats travelling the other way in the Sound were under sail. Alas, we made good time and covered the 40 odd miles to Port Jefferson on Long Island in 6 hours. We took a mooring for tonight at the Setaucket Yacht Club. Internet access, and a real shower on land tomorrow morning. What luxury! We do have a shower aboard, but wanting to conserve water, we always make it really quick.

We took the dinghy in to dock and walked around the town this evening. The Yacht Club is right in town and there are many little shops, cafes and restaurants. There is a ferry which crosses the Sound to Conneticut as well. We stopped for pizza at this great little spot and then indulged in a Caramel Macchiato from Starbucks for dessert. Now, I sit in the V-berth office on our boat writing this. I hear the last ferry arriving for the night. The breeze is cool and comfortable. The lights of the town have all come on. Tomorrow we are planning to cross over to the Conneticut side and continue our adventure. 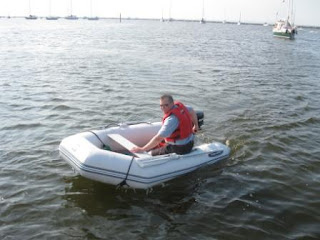