Shediac and back home

It's been a few weeks since we finished our first cruise of the season, and now we're preparing for our second (another trip to the Bras D'Or Lakes).  After arriving back home, life became quite hectic and finding time to finish off our blogging about the first cruise became difficult, leaving us wondering why we ever came home at all.

After we left Summerside, we made a quick trip to Shediac and spent two days at the Shediac Bay Yacht Club and Marina.  There are two options for marinas in the Shediac area.  Looking at the chart, we weren't sure that there was enough water in Shediac to accommodate our 6 foot draft.  But we made a couple of inquiries, and found out that there was no problem, so we decided to go right into Shediac.  In our minds, this marina has a big advantage over the one at Pointe de Chene in that it is much closer to downtown Shediac.  It is only a short walk from the marina to stores in the town.

We had to motor most of the way into Shediac, but were able to raise the sails as we moved along the New Brunswick coast.  The highlight of the trip was a quick encounter when we were sailing along, and both of us heard a strange noise coming from behind the boat.  We turned around, and there was a dolphin training along behind the boat.  He didn't stay for long, only a few seconds, then disappeared beneath the water, but it was the highlight of the day's sail.

We stayed in Shediac for two nights.  We had a visit from family ont he first night. The second day, we were considering going on to Buctouche, but it was a rainy, miserable day, so we simply stayed put and had a lazy day.  The marina in Shediac has well-maintained washrooms and showers, along with pump out facilities.  We pumped out our holding tank, and there was no extra charge.

We also had a Coast Guard Courtesy Check done for our boat. Members of the Coast Guard were visiting the marina that day offering to do the check. It is a voluntary service where they come aboard and inspect that your vessel conforms to all safety and legal requirements. We now sport a Courtesy Check sticker on the mast!

Finally, it was time to start making our way home.  Another overnight in Summerside led to us getting some advice on anchoring on the way home.  It was race week in Charlottetown, so our natural stop-over was not available for us.  Another couple of sailors, Chick and Cheryl on Great Habit, recommended Tatamagouche Bay as a good place to anchor.  So in the morning, we met our friend Meaghan who came along with us, and set sail for Tatamagouche Bay. 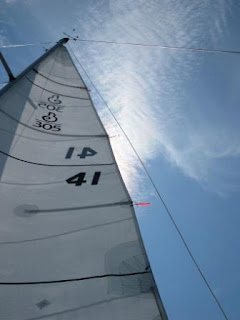 We sailed most of the way, making almost 9 knots with the current as we passed under the Confederation Bridge. As it got later in the day, the wind moved directly in our face and the seas picked up.

Rather than tacking back and forth, we turned on the motor to get in at a reasonable time, and ploughed our way through.  It was a bit rough, but once we were into the Bay, the going got easier.  We crossed to the South side of the bay to shelter us from the wind as much as possible, dropped the anchor, and spent a quiet night off the Nova Scotia shore.

Overnight the wind died down to nothing, and although it was a beautiful day, we had to motor all the way home .  The sun was hot overhead, so we rigged up a shelter over the cockpit, which not only kept the sun off, but channelled what little breeze there was onto us.  Finally, we arrived back in Montague having enjoyed our first cruise of the summer season.
Posted by Jay