Seals, Dolphins and Whales, Oh My!

So, we are off on another sailing trip. This time to the Bras D'Or Lakes in Cape Breton, Nova Scotia. Arguably one of the nicest cruising grounds on the east coast, a trip to the Bras D'or Lakes has become an annual pilgrimage for us. With much of Jay's family in Cape Breton, it is fun not only because of the great sailing, and protected anchorages, but also provides us a great opportunity to visit family and friends.

We stayed aboard in Montague on our first night, provisioning the boat and dealing with last minute details. The next morning, we left around 10am. A bit of a late start, but we were only planning a short passage to Ballantyne's Cove, Nova Scotia, just across the Northumberland Strait. You can make Port Hawkesbury in Cape Breton in about 12 hours of sailing, but we were in no hurry and decided to make Ballantyne's Cove (a 6 to 7 hour sail) our first stop on the trip.

The day was mostly sunny, warm and calm as we set out. As we motored up the Montague River and out of Cardigan Bay, we took advantage of the calm seas to bake some muffins and make coffee. As we left Panmure Island behind us about 12:30, we spotted a seal, poking his head up out of the water as we passed. I'd like to think he was wishing us a safe passage, but likely he was more curious about the noise of our engine.

About 1pm the wind picked up enough that we could raise the sails and for the next few hours we sailed along at a nice 6 knots, enjoying the sunshine and the sail. As we approached the Nova Scotia shore the wind died. We shortly grew bored of our reduced speed of only 2 knots, so, reluctantly, we started the engine. No longer needing to pay close attention to the sails, I started to spend even more time scanning the water for signs of marine life. The water is very deep off Cape George and we have seal seals, porpoises, dolphins and whales here in the past, so I was keeping a vigilant watch for telltale signs. I was rewarded. Off our port side I spotted several Atlantic White Sided dolphins who looked to be feeding. They were splashing and diving and were a little ways away, so it was tough to count exactly how many there were. But at one point I think I counted 8 different fins. We watched them as long as we could and tried to take a few photos.

Giddy with delight at having seen them, we motored on, drawing nearer to Cape George. Suddenly we spotted more fins off our starboard side between us and the shore, which was not quite 2 NM away. As Jay scrambled once more for the camera, a pilot whale surfaced about 50 feet from the boat. I was awed by their size. Pilot whales are 20-25 feet in length and can weigh 3000kg.

The whales and dolphins moved on and so did we, feeling a little awestruck. We motored around Cape George and pulled into Ballantyne's Cove about 5:30pm. As we made fast the boat, we looked at each other and grinned. Our trip had gotten off to a marvellous start. 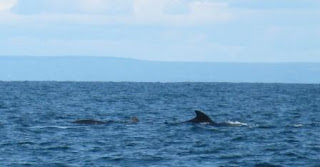 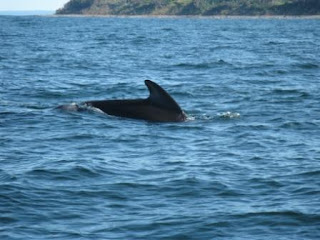