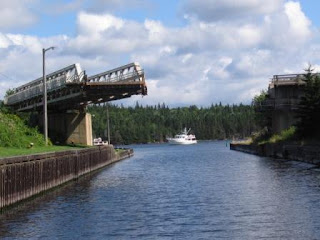 From our home base in Prince Edward Island, it is just one day’s sail to the Bras D’Or Lakes, which are arguably the best sailing grounds in Eastern Canada. This lake is large enough to offer plenty of open water sailing, but small enough to block the worst of the Atlantic’s weather. The shoreline is full of deep, sheltered coves to pull into for an afternoon’s swim, or an overnight anchorage. Although the bottom is rocky and hard in many places (unlike the keel-friendly sand bars of Prince Edward Island), the dangerous areas are actually few and well marked. We’ve now visited the lakes each of the past two years, and have only touched on the areas we would like to explore.

From PEI, the most efficient way to reach the Bras D’Or Lakes is through the Canso Causeway and Lennox Passage, then the St Peter’s Canal. I grew up in the little community of L’Ardoise, only a few kilometres away from the St Peter’s Canal. When you live in that area of Nova Scotia, the village of St Peter’s is the principal service area, having the bank, pharmacy, grocery, and hardware stores. Also of interest to sailors is the top quality marina in the community, with all of the amenities within walking distance. When anyone from the area talks about “going to town”, what they mean is they are about to make a trip to St Peter’s.

My home in L’Ardoise is just next door, but on the opposite side of the canal from most of the town. Any trip involved a drive over the bridge crossing the canal. It was always an event to be stopped at the swing bridge so that a boat could pass underneath. People in the cars closest to the locks would generally get out of their vehicles and watch the boat or boats pass, waving to the sailors on deck and snapping pictures. I was often among the group watching.

Our first season with Obsession, we made the trip to Cape Breton late in the season. I have to admit, one of the highlights of the trip was making the canal passage. After traversing the locks, we made our way up to the bridge, and they swung it open to let us through. For the first time, after spending many years watching from up above, we were the ones responsible for stopping the line of cars on the highway. The occupants climbed out to watch us go by, many of them waving to us. For me, personally, it was a great way to start off our visit.
Posted by Jay