Today Jay and I went to Ballantyn'e Cove, Nova Scotia. We have been there a few times in the past two years, but this was the first time we arrived by land. Ballantyne's Cove is approximaely a seven hour sail from Montague, PEI. This makes it a nice destination for an overnight or a weekend sailing trip. It is a small fishing port with a 40 slip marina and a Tuna Interpretive Centre. Located about 30 km north of Antigonish on the north shore of Nova Scotia near Cape George, this port offers a nice protected harbour with a high breakwater.

Although most boats have been hauled for the winter, there was still a beautiful view of the marina and St. George's Bay. 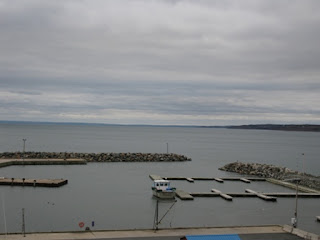 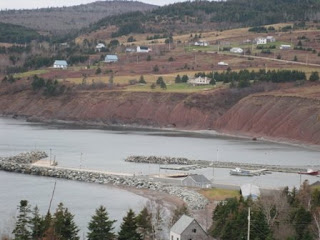 The Tuna Interpretive Centre, which also houses the marina office, showers, and laundry facilities for visiting sailors was closed for the season, but in season, the facilities are clean - though you have to pay for the showers. Diesel is available and you can buy crushed ice used by fisherman to replenish your icebox, though it should not be used in any cold drinks.  In season, there is also a small take out place with good fish and chips.

Over the past couple of years, we have sailed to Ballantyne's Cove a few times, although one of our visits last year was quite memorable. We had taken a three week cruise  - our first long trip with our new boat. We were so proud of ourselves as we had been having a few minor issues with the engine during that trip - twice we ran into a situation where power was not getting to the starter - but after 5 minutes or so with playing with the wires, Jay was always able to get the engine started. For new boat owners and untried sailors this was great progress.

On what was supposed to be our final day of our big trip last summer, we left St.Peter's, CB for Montague. It was a beautiful day and we had a great sail (motored thru the bridge at Lennox Passage), then sailed thru the Strait of Canso. Jay made muffins while under sail. We talked on the VHF to a supertanker that kindly warned us he was casting off and suggested we make our way to the other side of the Strait.

We ate fresh muffins with fresh brewed coffee, remarked how beautiful a day it was for sailing, and decided that life just could not get any better. It was late afternoon and we were looking forward to our first night sail across the Northumberland Strait.  As we approached the Canso Causeway, we pulled down the sails to start the engine to motor through the bridge and lock. On the other side of the lock, it was less windy as the wind was blocked more by the hills, so we motored for awhile. As we left the Strait of Canso and entered St. George's Bay, the swells were larger, much larger than they had been on the other side. But the wind seemed to be a bit stronger so we decided to try the sails again. We unfurled the foresail and turned off the engine. However, the wind was just light enough that it could not keep the sail filled constantly as we were tossed by the swells. So we decided after 15 minutes of being tossed around to not bother putting up the main, refurl and to restart the motor.

We were in the Bay, so no worries about drifting into anything.  There was nothing around and plenty of depth under the keel, so Jay came back and started fiddling with the wires while I went forward to pull out the jib again. Because we had been intending a night sail, I had already set out the jacklines. The boat was bouncing us about so much with no steerage that I donned my life vest and clipped on to go forward and pull the sail back out. The furler was temperamental and sometimes it would jumps its track and then jam as the drum casing was cracked (it has since been replaced!).It was one of my most exciting experiences moving to the bow of a boat! The boat kept falling away from under me as I made my way forward, hanging on for dear life.  Of course, the furler would always misbehave when we were being tossed about or in high winds, never in calm weather.

After I managed to get the line unjammed and pull the sail out, only getting slightly soaked from the bow splashing down in swells, I came back to the cockpit and tried to steady the boat as much as I could in almost no wind and in high swells with little to no steerage. We were making a measly 1.5 knots. After about 20 minutes of Jay poking, prodding, trying the key, tearing apart the engine panel, checking the battery, fuses, wiring harness, etc., Jay just tried the key, and it worked. He had found nothing wrong, but this time, Obsession decided to start. We wasted no time in furling the genoa and getting under way. Of course, after having his head upside down for so long bouncing around, Jay was now feeling queasy  - an unusual situation for him. I was also starting to feel a bit off too, so I took the wheel (which seems to be my remedy when I start feeling off.) At this point, I made an executive decision to head for Ballantyne's Cove. It was still about 18 nm, but with Jay feeling nauseasous, with me feeling a bit less than 100 per cent and with the swells increasing and an unfavourable wind, going on to Montague made no sense at all.

Of course, to make matters worse, after about 30 minutes, we could start to smell an awful burning rubber smell. We knew that smell. We had figured out that smell a week and a half earlier. The fan belt, which we had recently replaced, had probably stretched a bit now that it had been used and was likely chafing slightly. The rubber particles on the hot engine produce this awful sickening smell. It was making Jay feel worse, so I
suggested he take it easy, so he huddled against the pushpit, while I was on the wheel. He was not in imminent danger of being sick, he just felt yucky. What had been a beautiful day of sailing earlier that day had turned into a real slog under power.

It was now getting dark, and there was no point in turning off the engine, which might not start again to tighten the belt as it would be too hot to touch right then anyway.

We were both tethered to the jacklines and so we pushed on. Although the waves were not as high as they were the day we went from Dundee to St.Peters in 22 knots with our head to the wind (we had to motor for 90 minutes that day into high waves and I got absolutely drenched) in a way it was way more unnerving. For the last hour we were being hit by the waves almost broadside - a bit to the stern. It was hard to see them coming in the dark and so sometimes I would glance to my right and see a wave right beside the boat which were at the height of the lifelines and I had to react quickly. It was more eerie in the dark, as I could not see what was coming. Anyway, we made Ballantyne's Cove just before 10pm that night and I was never so happy to pull into a marina. Even the fact that they were experiencing a water pressure problem, so no showers, was not enough to dampen my mood.

The next morning Jay tightened the fan belt and there was no problem starting the engine.  We sailed back to PEI and Jay later replaced some wiring which had corroded.  That problem seems to have been rectified.

Today, as we stood overlooking the now almost completely empty marina at Ballantyne's Cove, I thought about that passage and how thrilled we were that night to pull into its protected waters.
Posted by Michelle