Well, the 2009 sailing season is now at an end in Prince Edward Island and so it is time for me to return to armchair sailing again for the winter.

This year, I thought Iwould create this blog to talk about sailing in Prince Edward Island and the Canadian Maritimes, general thoughts on sailing, interesting articles and books, and our travels with the s/v Obsession.

This was our second year with "Obsession 305", a Beneteau First 305, which my husband Jay and I sail out of Montague, PEI. 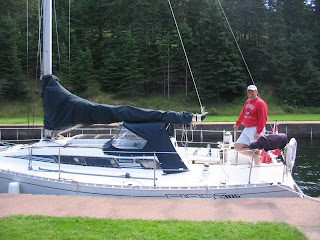 Jay and I bought Obsession in May 2008. As new sailors and new boat owners, the past two years have been exciting and sometimes a bit anxiety inducing. This blog is meant to share some of the things we have learned, some of our passion for sailing, and some of our adventures.

In 2009 we sailed 988 NM by doing several day sails, several short trips to other ports in Prince Edward Island (Charlottetown, Souris, Murray Harbour and Brudenell) and Nova Scotia (Ballantyne's Cove and Pictou), and a two week trip to Nova Scotia's Bras D'or Lakes in Cape Breton. In 2008 we had managed only 778 NM with day sails, overnight trips to ports in PEI and a three week trip to the Bras D'or Lakes, so 2009 was a definite improvement. But if you had of told me five years ago I would be skippering my own sailboat, I would never had believed it.

Jay and I had only learned to sail keelboats in 2006 when we took the CYA Basic Cruising Standard from Waveskills (http://www.waveskills.ca/), which is based in PEI. This course and the Instructor, Ellen MacPhail, ignited an absolute passion in me for sailing (which delighted Jay, who never could get me to enjoy sailing his Laser) and gave me the confidence to do something I had never done before. Jay and I spent 2007 sharing with other former students the use of a 20 foot Santana, which Waveskills owned, getting several additional certifications through the Blue Heron Power and Sail Squadron (http://www.blueheroncps.pe.ca/), and searching for our own sailboat. In 2008 we both acheived our CYA Intermediate Standard (Skipper). This year we entered our first Northumberland Strait Yachting Association (nstya.com) Race!

Now with Obsession safely tucked away for the winter, I intend to spend time dreaming and blogging about sailing as only one who is truly obsessed can!
Posted by Michelle