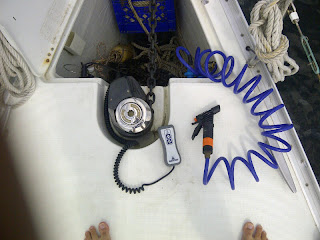 On our first boat, Obsession 305, we did some anchoring overnight, but one of the major attractions of our new boat, My Obsession, is the enhanced ability for anchoring.

Earlier years, although we were pretty self-contained, our main limitation was refrigeration. Having only an ice box meant that we had to come onto land to get ice every second day, or risk food going bad. Since that meant pulling up to a dock, our routine became a night at anchor, followed by a night (or multiple nights) at dock.

Now we have a refrigerator and freezer. This greatly extends our independence, and we will stay out at anchor for multiple nights. It also allows us to take a mooring when we want to be closer to land. For instance, on our current trip to Cape Breton, we have been at a mooring in St Peter's instead of on dock. Since we generally spend quite a few nights here to visit family, it is a big savings - $25 per night on mooring, as opposed to about $55 on dock.

That brings me to the second item that enhances our abiity to anchor - Ducky. This is our dinghy, which gives us a bit more freedom of movement without having to bring up the anchor. It also makes mooring possible, since we use Ducky to get back and forth from shore. I think Ducky has paid for himself in the one summer we have had him.

Also, handling the anchor on My Obsession is much more pleasant. One thing you learn quickly when anchoring is that underwater mud is messy and stinky. Previously, I pulled up the chain by hand. I had a dedicated pair of gloves that I used, which would get mud coated and would really smell. All that mud would end up in the anchor locker, which was always a mess.

Now, we have an electric winch on the bow, which pulls up the anchor. In addition, there is a washdown hose that we can use to clean the anchor chain as it comes on board. Much nicer and cleaner than our earlier arrangement. Anchoring is so much more pleasant now, and we can enjoy the best parts of cruising more than ever before.


Sent on the TELUS Mobility network with BlackBerry
Posted by Jay