Launching for the Season

In PEI, leaving your sailboat in the water all winter is not an option due to the sea ice. They are ususally hauled out in early October and relaunced in mid to late May. Some marinas, such as the Charlottetown Yacht Club, have permanent boat lifts and mast cranes. In  Montague, there is no pemanent boat lift, so each year we hire a crane for a few hours on a Sunday morning and all the sailboats get lifted in to the water on the same day. When the crane leaves Montague it often goes to the Cardigan Marina to lift in more boats. This year there were only 8 or 10 boats that were launched in Montague. Due partly to tides, we did not put the boats in until May 30th  this year, the morning after Jay and I returned from our sailing vacation in the British Virgin Islands.

Obsession has its own trailer and and we store it in a nearby warehouse over the winter. A few weeks before the boats go in, we get it out of storage and get it ready for the season, scraping and painting the bottom, repairing anything that needs it and checking it out from bow to stern.  The mast, which is stored on its own mast trailer over the winter, is also checked while it is down, as are all the halyards.

The morning the boats go in the water, we haul the boat and the mast to the marina in Montague, where everyone helps each other get all the boats launched. The boats on their trailers are backed up under the crane, one by one. Large straps are placed under the boat and the crane lifts the boat off the trailer.  Lines are tied from the bow and stern and people on the ground hold the lines steady to keep the boat from swinging. The bottom is touched up with paint on those places which could not be done while the boat sat in its cradle, like directly under the bottom of the keel and the area under the pads.  The crane then lifts the boats higher, swings around and gently places them into the water. The straps are released from one side and pulled back on land to be used for the next boat. The newly launched boat is moved out of the way and the process starts again with the next boat. 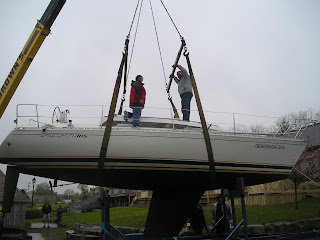 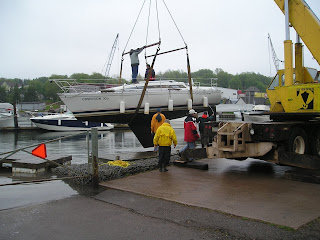 In some places, masts are left standing upright on the boats, especially if the boats are stored in a boat yard. In most of PEI, the masts are taken down and stored either laying on top of the boat, on mast trailers, or on mast trees  (which hold several masts) at a marina. Masts are then lifted into place after the boat is launched.  In Montague, there is a permanent mast crane which can handle most of the masts of the boats which are berthed there. Obsession's mast is 38 feet long and just a bit too heavy for the mast crane in Montague. We launched Obsession last so the hired crane could change the spreaders (used to hold the straps with which the boats are launched) to a hook, and then with the hook, we could tie a line around the mast and lift it into place. Thankfully, other sailors always stick around to help with stepping the mast too. The other boats which can use the mast crane step their masts later that day or over the following week, as weather permits.
Boat Launch Day is one of my favourite days of the year. The proimise of the whole summer of sailing is in the air. 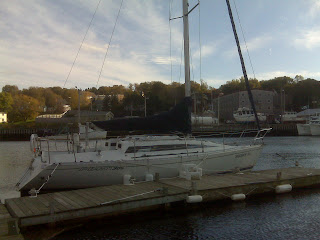